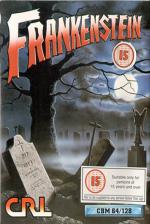 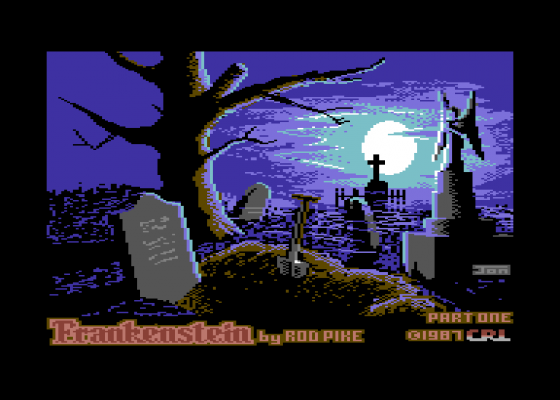 Horror and violence in films and on TV is thought of as a phenomenon of our own times, and the cause of many social problems. Yet the novels of the last century were at least as horrific and violent, and with as much descriptive detail as anything you are likely to come across from the present day. Rod Pike's latest excursion into the realms of horror, proves this beyond doubt.

After his outstanding success with Dracula, Rod has applied the same formula to Frankenstein. Like Dracula, this too, is based on the original book, written some hundred or so years ago by Mary Shelley.

Dr. Frankenstein played at God, and collected a set of spare bodily parts - only the best, you understand, from the local charnel houses. Back home, he fitted his grisly jigsaw together, and then breathed life into it. Finding himself facing a huge and ugly being, he fled in terror, leaving his monster to its own devices. It wasn't long before it was terrorising the locality, and murdered the doctor's own sister in a gruesome way. 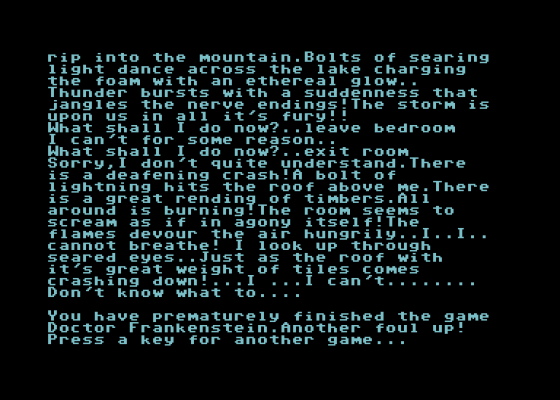 Don't expect to find the popular image of a bolt-through-the-head moronic monster when you play the game, though. That is not the authentic character of the monster, says Rod. "The tragedy is, that he was big but not lumbering. He was an agile creature, of great sensitivity and intelligence." Not at all like your Hammer horror film.

In the first two parts of this three-parter, you take the role of Dr. Frankenstein, intent on tracking down your monstrous creation, with a view to exterminating it. The local populace are grateful for your courage, and treat you as something of a hero, ignorant of your part in his creation, a fact which you kept a secret even from your own father.

You set off from your father's house on a bitterly cold day, and head for the other side of the lake in your search. As usual, Rod has filled the adventure with screenfuls of highly atmospheric text, and thrown in a few puzzles to make the story work as a game. But the puzzles are really secondary to the narrative, which tends to drive the game, and so, on occasions, it pays to wait and let things happen.

An encounter with a grizzly, a hair-raising journey across a lake in a leaky boat, and a constant battle against the cold, take you through part one of this GACked adventure. Rod places the puzzles nicely, so that they fit in between passages of high drama, without spoiling the tension.

Part two introduces a tragic couple, and in a scene full of pathos, you learn the horrific details surrounding the demise of a young man at the hands of the monsters you are seeking. And eventually, you see him...

An unusual feature of Rod's multi-part games is that it is not necessary to complete one part before proceeding to another. Not only does this give the player access to the game at three points, allowing you to see more of what you paid for if you get stuck, it does save all that tiresome saving and loading of data from one part to another. And to anyone who argues that it spoils the game to come in partway through, I say that it entirely up to you - you don't have to if you don't want to!

But Rod departs from this philosophy in Part 3. No data transfer is necessary, but you do need to know the codeword from Part 2 to be able to commence Part 3. And I feel in this case it would spoil the story if you were to rush into the end game without having thoroughly played through to this point.

Here you become the monster himself, newly created, and listening and learning. You have to come to terms with the shock of your horrific appearance. You see a couple caressing under a lamp - but love is not for you, nor is friendship. Men and women alike, are frightened and revolted by you, and violence ensues, in which you get shot.

Wounded and heartbroken, you stagger away in pain, expecting to die - unless you can cure your festering wound. In Part 3, to progress the game you need to watch, listen, and think, to build up your IQ, to survive.

My main criticisms are the slowness of the response, and the vocabulary, which is rather difficult at times. The average adventurer is not above becoming a human thesaurus now and again, and it is true that eventually the right words will be found, without too much difficulty. What irks a bit is that, at times of danger, the narrative doesn't forgive you for entering something that is unrecognised, and relentlessly progresses the plot. Thus, getting the right words in a limited number of moves becomes a matter of life or death.

If you like gothic horror, you are going to like Frankenstein, the adventure. Rod has again shown that the formula of going back to the original, produces an excellent piece of interactive fiction.

If you like gothic horror, you are going to like Frankenstein, the adventure. Rod has again shown that the formula of going back to the original, produces an excellent piece of interactive fiction. 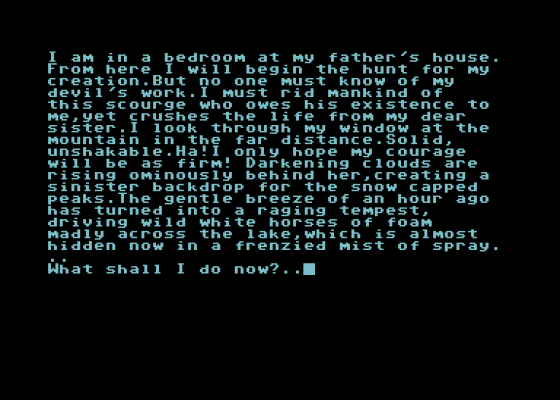