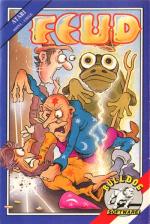 There were once two brothers, Learic and Leanoric, extremely knowledgable in the arts of magic, and they lived together in peace and quiet in the small village of Little Dullford.

Then one summer Leanoric turned his brother into a frog. Not a very nice thing to do to anyone, let alone your own brother. After a wekk, Learic was restored to human form, but already the dark clouds of a feud were beginning to build up.

Then everything changed. The forest went quiet, then shouts, bangs and explosions erupted from the trees. Leanoric left his house to move to the other side of the village, and the feud began. And woe betide anyone who got in their way.

That's the story, so on with the game. Leanoric is now your deadly enemy, and will do his utmost to destroy you. So, as all good feuds go, you have to destroy your brother, or be destroyed.

To do so, you must travel around the kingdom (mainly in the garden of the farmer Hieke) collecting herbs in order to mix and cast spells of different results.

But the villagers, especially Hieke, don't take kindly to warring wizards fighting it out in their backyards, especially Learic (for some unknown reason) who is controlled by you.

To collect a herb, you just stand in front of it and walk towards it. Learic will then bend down and pick up the herb.

Then the page on which the herb is shown will suddenly flap into view (a nice touch). To mix a spell, you have to stand in front of the cauldron, press fire and left or right to move to the page in the spell book with the spell that is required.

Release the fire button, and bingo, the spell will be mixed, but only if you have both ingredients (shown in red). You will then be armed with that spell.

Fantastic graphics, great sound, addictive gameplay and lots and lots and lots of action-packed screens make this game a must. And for only £1.99...! It may not appeal to everyone, but if you've got some time to spare, play Feud. You won't be sorry.