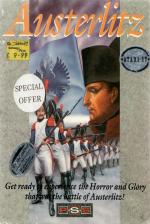 Following the example of his earlier successes, Turcan is laying considerable store on the realism of this game. Austerlitz isn't just another simulation in which you move pieces around a map as if they're part of a chess set. Instead, you assume the role of either Napoleon or Czar Alexander I, and face the same situations in your living room as they faced nearly two hundred years ago on the battlefield.

To move your armies you must first dispatch riders with orders. The orders will not be followed until the rider reaches his destination. He can, of course, be killed before he reaches the relevant unit.

Your view of the battlefield is restricted to what the leaders would have seen at the time. Judgements about which unit to dispatch where must be based on reports received, adding the extra problems of being unable to see the formations of the enemy.

Since this is a simulation of an actual war, considerable research has gone into making certain that every part of the French and Allied strategies are followed. At the start of a new game, a set of questions enable you to select which leader you want to play, whether to display various messages about what's happening (so you can "cheat" and watch the game from both sides), or whether to change the historical orders. Normally both sides are issued with the orders given at the start of the real battle but these can be changed to give variations on the battle scenario.

The war begins at 7am on December 2nd, 1805 and is played as a series of turns. Within your turn, you have 15 minutes of simulated play and a maximum of eight orders. The orders are taken from a specific set of commands. The battle comes to a close when one side has crushed the other to a pulp. When this happens, your progress is assessed and you're presented with a full battle report that details your final position and takes stock of your troops. This is useful for planning your strategy in the next game.

Unlike many other wargames, the map is presented as a solid 3D view, even detailing the heights of hills and mountains. This is regularly updated as the battle progresses. You can obtain additional information about the scene by clicking the mouse on any part of the screen and can also view the scene from different directions to give you a more complete assessment of your position.

Since this is a strategy wargame aiming for historical authenticity, no sound is necessary and hasn't been included.

The reality factor is Turcan's ace card. The reality of war made hits of Waterloo and Borodino and it's certain to endear wargame addicts to this latest release. As yet, there's no wargame system to beat Turcan's, which is so considerate of almost all aspects of war that even unit morale is taken into account.

Nevertheless Austerlitz still doesn't claim to look at everything and admits to ignoring such things as gun smoke blocking the line of fire and the breaking down of regiments into lines of skirmishers.

Austerlitz excites more than Borodino and Waterloo because it was Napoleon's greatest strategic victory. If you're looking for a wargame that's as realistic as possible, there's no beating any of Turcan's three great battle simulations.

At the start of your army's movement phase, you may move your headquarters by specifying a compass direction and clicking on an area of the map with the mouse. Just as in a real battle, you cannot move your army straight to that spot but may move only as far as time allows.

After this, basic orders let you make direct commands to the program. These are not treated as part of your turn. You may use the LOOK command to change the compass direction from which you view the field, or you may find out your point situation - points are awarded according to the current size of your army, prisoners taken, casualties caused and farms and villages under your control.

Battle orders are the real meat of the game and these comprise MOVE, ATTACK, DEFEND, SHELL, STAY IN RESERVE and RETREAT.

1. Move Moves your army to another location

2. Attack Sends your army onto the battlefield in an all-out offensive attack

5. Stay In Reserve Be ready for more orders

Added to these are the place names and Corps Commander so that an order may look like any of the following:

Murat move to Bosenitz Stream. Bernadotee shell the enemy cavalry one mile east of you. Davout send me your battle report. Keinmayer transfer your cavalry to Langeron. Soult form a defence line from the north flank to Menitz linking with Legrand.

Since these conform closely to how you would dispatch orders anyway, you become accustomed to the lingo within an hour.

The reality factor is this game's ace card. The reality of war made hits of Waterloo and Borodino and it's certain to also endear wargame addicts to this latest release.