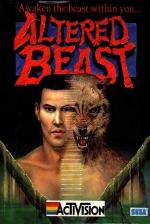 Activision's latest Sega coin-op conversion takes on the challenge of an arcade game renowned for brilliant graphics. There's been a question mark over the ST's ability to handle the same kind of effects - after all, the arcade version had enormous animated sprites that any micro would be hard-pushed to emulate.

It is apparent from the very start that Altered Beast is a traditional beat-'em-up. You need all the foot kicks and punches you can muster to defeat a bunch of bald baddies, and with all this action going on it's easy to forget the objective. The whole point of the game is that you must rescue the fair maiden being held hostage at the end of the fifth level.

Getting there wouldn't be too bad if only each level weren't littered with one enemy after another. Just to make things doubly difficult, an end-of-level guardian has nothing better to do than wait for you with fists at the ready.

Tackling the mutated clones is easier if you can collect special spirit balls. Gather enough of these and you transform into a superior beast possessed with devastating power and mobility - the more tokens you collect, the better the beast you become. The game starts with you playing a man and, as the tokens increase, you change, first into a Strongman, then into Werewolf, Weredragon, Bear, Weretiger and finally a deadly Golden Wolfman.

Each has its own special abilities. A Werewolf does an excellent job of ripping flesh apart, the Dragon snorts fire and the Bear's appalling bad breath knocks out even the really tough guys. Both Strongman and Golden Wolfman dish out the most powerful of punches - essential in the later levels.

The Wolfman really adds to the fun. As well as being able to launch fireballs at anyone who gets close, he can also throw himself at the enemy and lay into anyone standing before him - great if you're into body-contact sports.

There's a vast range of kicking and punching available once you've learnt how to control the joystick. Just like the popular Karate games, it takes a while to master the different combinations of fire button and stick movement, but even just wild waggling gets you somewhere!

The visuals are undoubtedly some of the best ever seen on the ST. Backgrounds are clearly drawn to resemble the arcade game as much as possible, but it's the main character sprites which are really impressive: these are massive and brightly coloured.

The animatio isn't as smooth as it might be, but there's no problem working out what's going on or seeing the result of your actions. Even fans of the Amiga Sword Of Sodan will be impressed by Altered Beast's large sprites and great animation.

Just as much thought has gone into the sound effects. Although there are no sampled effects, the ST sound chip has been programmed well. The music which plays during the game quickly becomes monotonous, ut if you can survive this the there are lots of additional effects during bouts of kicking and punching.

Altered Beast doesn't claim to be an imaginative game, and if you're not a beat-'em-up addict you won't like it. This one differs from the rest in that it boasts brilliant graphics.

The first time you set eyes on its massive animated sprites and well-drawn backgrounds you know you're in for a treat. To an extent, it delivers.

When it falls down, though, is in the animation: there simply aren't enough frames of animation to give truly smooth, likelife movement. Yet, despite its lack of originality, Altered Beast has a classy feel that really makes you feel a part of the game.

Despite its lack of originality, Altered Beast has a classy feel that really makes you feel a part of the game.