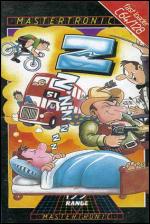 This game has all the ingredients of success, but ends up in the cat-litter tray. It pains me to have to say that, since I'm obviously eagerly awaiting someone who can bring out a good cheap adventure - and if anyone can do it, Mastertronic ought to be able to. But, unfortunately, they haven't. Mastertronic deserve the gratitude of Wizards worldwide for rescuing Carnell Software a couple of years back and re-releasing the classic Wrath Of Magra, but Zzzzzz... is a sad example of botched opportunities. It's an attractive game to look at. The graphics are detailed and quite well drawn, the screens are colourful, the character set has been redefined and the SID chip is kept busy throughout pinging and ponging through a variety of musical and other effects. There's also a joystick option for selecting most of the common commands such as GET and EXAMINE. One novel touch involves using the joystick to illuminate different points of the compass which then indicate which directions are open for movement. All this is good, clean programming.

Alas, when it comes to the game itself, it's another story. In fact, it isn't really a story at all. The idea is that you've fallen asleep and found yourself in the land of Zzzzzz... You have to solve various puzzles and attempt, in the end, to wake yourself up. The problem with all this lies with the inane sense of humour that keeps cropping up, combined with some very illogical plot developments. For example, you don't die in the program when you get into trouble (which you can at any moment, and often for barely acceptable reasons). Instead, you are instantly transported to any one of a number of randomly chosen locations. You retain your possessions, so you might well find yourself swimming along beside the shore carrying a bucket, spade, and a bicycle. If you've ever tried to do this, you will know that it's not possible without casting some pretty nifty spells and wearing water-wings.

OK, it's cheap, but money isn't everything... and life's too short to spend snoring away in front of this little offering.