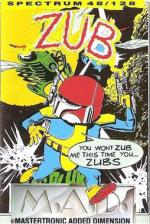 What noise do bees make when they fly backwards? Zub, zub. And coincidentally, Zub just happens to be the name of Mastertronic's latest release on their MAD label, which, strangely enough, is nothing to do with bees. Originally titled "Zob", the name was changed after someone pointed out that Zob is in fact a rather rude word in French.

Zub is a small planet in the Zub galaxy. It is populated by Zubs who fight wars with Zubs from other planets. Right now Zub is in a bit of a pickle. Some nasty thieving Zub has walked off with the valuable Green Eyeball of Zub. It is your job as Zub Private, Third Class, in the glorious army of Zub1 to go and get it back.

In the game the player controls the hero, called originally enough, Zub. Zubs are genetically created creatures who's sole task in life is to fight. This particular Zub happens to be a coward and will need your coaxing to get him through his mission.

Each planet has its own security droids who are fairly keen to stop Zub making any progress. Some of these Droids are relatively harmless and will only push Zub off his platform if they touch him. However, on some of the planets there are armed droids and these will do far more damage to Zub. Zub must shoot each alien as it progresses down for the top of the screen towards him. If shot the droid will flee back to the top of the screen and start its progress downwards again. The position of each nasty is shown on the same map showing Zub's progress.

A picture of zub in his space suit shows how much energy he has left. As his energy depletes his internal skeleton is gradually revealed until he collapses in a heap of dried bones when all his life force has been sapped away.

There are five skill levels in the game and the player gets to choose which level to play at the beginning of the game. These levels range from Easy, Peasy to Aaaargh (probably quite hard!)

Control keys: definable
Joystick: Kempston, Cursor, Interface 2
Keyboard play: hard to get the hang of at first
Use of colour: restrained
Graphics: brilliant title screen, simple in the game
Sound: the odd beep on the 48K. Played on the Spectrum Plus 2 is far more interesting aurally
Skill levels: five
Screens: ten three by three arenas

I was expecting yet another boring old arcade adventure while this loaded up, so my eyes bulged a little when I first saw the two title screens. After my Initial shock had passed I went on to play the game, unfortunately it didn't really live up to the great attract mode but it is a good bit of mindless arcade action all the same. Graphically, there is little variation from level to level. The sound is dull although the 128K version is admittedly a lot better. On the whole I really like this, OK perhaps it isn't the best presented of games but it plays very well.

There's very little in the way of originality these days so it's pleasing to see something like Zub which doesn't bring back memories of other tried and tested formats. Zub, the game, is just about as much fun as the title screen which has to be one of the best I've seen in ages - especially the parody on the Bond films. On the 128 the music is excellent with a really boppy tune that plays throughout. T he game itself is great stuff and if you don't know what to do with your next three quid then Zub is a must!

The presentation in Zub is spectacular to say the least. The 007 bit at the beginning of the game is very well done, and the menu screen and the 128 versions's sound are extremely well designed. But the game I found quite boring to play, although graphically it is very pleasing and smoothly animated. The game is a very basic platform game, that gets very laborious after your first game. I found the game very easy to play, but too simple for any serious game. Zub is a decent enough game for a budget price, but wouldn't be in my tape recorder very long.

I found the game very easy to play, but too simple for any serious game.