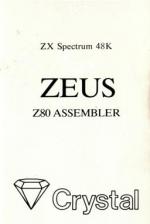 ZEUS was father to the gods and the new Zeus assembler for the 48K Spectrum is the big daddy of all assembler programs. It is very simple to use for the beginner but for someone who has even a basic knowledge of the subject the program can be a powerful machine code tool.

If errors occur during the assembly process the computer will list the errors with the line on which they occur. If there are no errors you can save the machine code and run it using a one-letter command "X".

Crystal Computing, the manufacturer of Zeus, also produces a monitor and disassembler for the Spectrum. As well as doing a full disassembly, the program will display the current state of the registers and alter them if necessary. It will also substitute lines of code and move around blocks of memory.

The Zeus assembler and the monitor and disassembler have been sadly neglected in the past. Both packages can be used together and form a very powerful tool.