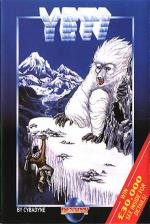 One of the first titles on the new Destiny label, headed by Francis Lee (ex-Beyond, ex-Starlight), Yeti has some bizarre tie-up with Chris Bonington, an expedition to the Himalayas, a huge cash prize, and the famous hairy monster which has been the object of speculation since someone found a tin of Yetiburgers in a monastery in 1922.

The game, though doesn't appear to have much to with the amiable anthropoid.

As you load it up, one word will spring to mind, and that word will be Exolon. The similarities are too staggering to be unintentional. Like Exolon, Yeti is a horizontally-scrolling shoot-'em-up featuring carefully designed backgrounds to eliminate colour clash, an armoured figure with a gun and an over-the-shoulder missile launcher, and a series of obstacles including projectile launchers, pits, bobbing spikes and flying missiles. Like Exolon, you hold the fire button down for more than a moment to launch a missile. Like Exolon, this results in an explosion of particles. Like Exolon, you collect bombs and bullets as you move along. Like Exolon, some of the obstacles are unavoidable and have to demolished. At first glance, even the backgrounds look the same; but you soon realise that instead of science fiction scenery, you're looking at Himalayan hardware. Instead of gun towers, you have prayer temples; instead of missile launchers, smiling Buddhas; instead of space warriors, trappist monks.

As you trudge through the landscape blasting obstacles, ducking under missiles and leaping to pot projectiles, you have to keep an eye on your falling temperature and ammunition levels. As you get towards the end of each level, you'll find a scooter which allows you to go faster; the same sort of effect as the armour which defends you in Exolon, really. Right at the end of each level, there's a shambling Yeti which is the object of the quest. So far as I know, there isn't a Yeti in Exolon, but I may well have missed it).

Personally I feel the only Destiny appropriate for this lot is a slap on the wrists and a short talk from Andrew Hewson. Sure, the game's technically fine, but it's hard to be really enthusiastic about such a slavish imitation.

Whoah! Haven't I seen this somewhere before? Exolon goes Himalayan.

Whoah! Haven't I seen this somewhere before? Exolon goes Himalayan.