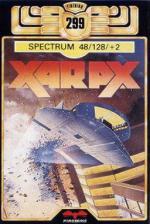 Vertically scrolling arcade games. What call is there for them? We must have had enough of them in the past. We've had Xevious, Terra Cresta, Commando and a host of others. But Xarax is a bit special. For one thing it only costs £2.99.

Xarax is a vertically scrolling shoot and bomb 'em up in the same guise as Xevious (get away). I say it's like Xevious. Well I'm lying. It is Xevious. In fact, it's a hell of a lot better than the official conversion of said game. You fly your little spaceship upwards over 7 levels of increasing difficulty. The backdrops to the levels differ greatly, so there is a lot of variety in the game. The first level alone is almost exactly the same as Xevious, you know what I mean - flying over a desert shooting flying discs and bombing pyramids and cannon installations. However things change.

The backdrops are very well laid out. They are designed in such a way that they provide a constant challenge (there are no 'safe bets'), keeping you on your toes, and it is well worth dying just to get your breath back.

The aliens don't just come on fast, they stream on to the screen in waves of about 8 at a time, though with practice you learn where they tend to appear from and it is possible to destroy them as they come on to the screen.

The game is hard. It's very hard. It took me a very long time to get off level 1, but I persevered, and found level 2 to be a lot better. It has lots of ships in it, a la Flying Shark, which fire missiles and bullets at you in an alarming rate. I have yet to complete level 2, so there is plenty of challenge there, and a dire need for a poke or cheat mode.

There you have it. A Xevious clone that is actually better than Xevious itself. If it doesn't do well I'll eat my granny, her bathchair and her collection of Cliff Richard LPs.

First class vertical scrolling shoot and bomb 'em up destined to be a hit. Better than many full price games around.

First class vertical scrolling shoot and bomb 'em up destined to be a hit. Better than many full price games around.