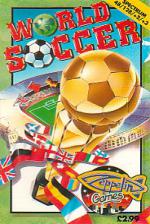 As the eleven thousandth soccer simulator to be published, World Soccer would have to be something special to jerk me out of my lethargy, especially since I normally HATE footie games. So what got me interested in World Soccer? Well, it's a tad more artistic than your usual management mess full of league tables and endless statistics.

To kick off the boring lists of statistics are there: the players, the league tables, the results. But the selection screens and inter-screen twiddly bits are remarkably arty. It's also written by someone called Derek Brewster, who Zeppelin describe as a 'former celebrity'. eh?

The games is partly icon-driven, with a hand-shaped pointer selecting from your ten options on the main screen. Bank brings you an account (tee-hee) of your financial status, the amount you have stashed and your wage bill. If the situation is dodgy you may have to flog some players to get in the black. The ON AIR option allows you to choose whether you get running commentaries of the matches: Medic shows which players are crocked, and Scout advises you which aspects of your performance need propping up by a wise player purchase.

Sell Players allows you to lay off some of your duffers, while League position shows you the current league table. Team Selection allows you to choose your squad, First Eleven shows the one you've picked for the match, and Match PLay actually lets you play a game.

You might be disappointed to learn that you don actually get to see the match, just the boring commentary from ZTV pundit Joss MacDonald - this is much more entertaining switched off, so the matches actually play themselves through to a result without interruptions. At half time you get to choose substitutes, and after a round of matches has been played you get another look at the league table.

It's all very entertaining until the novelty of the pretty icons dies away; then you're left with a straightforward and rather repetitive management game which will probably never make you gasp with excitement. Probably for complete footie-heads only.

It's all very entertaining until the novelty of the pretty icons dies away... then you're left with a straightforward and rather repetitive management game which will probably never make you gasp with excitement.