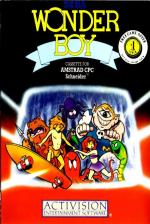 I have been playing this game in the arcade near me for quite a while. I'm still no good at it, but there was something about it that kept me playing - until, that is, I saw someone score over 250,000 on it. I don't know why, but I felt quite inadequate after that. Anyway, this version I looked forward to, though I did in no way expect it to live up to the arcade standards.

You play Wonderboy in his long and arduous mission to rescue his girlfriend Tina. Tina has been kidnapped by the evil king in a land far, far away. To get to him, you must traverse seven territories. Each territory consists of four lands and each land consists of four areas. Confused? Me too! Anyway, you will understand if you play the game. At the end of each territory you will come face to face with an ogre. Defeat him at all costs - mainly because you cannot get onto the next territory without doing so.

On your way you can pick up fruits by jumping into them. There are also eggs which contain a useful item: an axe, a skateboard - which you ride! - or a guardian angel. Be careful to jump over obstacles and to throw your ever-replenishing axe at the killer frogs, bees and snails. If they hit you, you die.

The first thing I have to say is that in almost every "true to life" aspect, this version is similar to the arcade one. The music is the same - or rather, it attempts to be the same. The graphics are dull in comparison not only to the arcade version but also to other games for the Amstrad. However, this game is not too bad. Its slow animation is annoying, but I got used to it. I enjoyed it, and I wish it were mine to keep - mainly 'cos it saves me 20p a go!

This one's got quite a lot going for it - a cute character, scrolling action, varied weapons and lots of adversaries. It does give the impression of being a less-than-perfect conversion, but I found it addictive. The multiple starting points through the levels are useful. I don't think this will disappoint many people - it's fun.

Grab Factor 65%
N. Slow movement takes a while to get used to.
P. Interesting quest to complete.

Overall 68%
N. Not quite what it could have been.

Not all that it could have been... Its slow animation is annoying... And yet I don't think this will disappoint many people - it's fun.