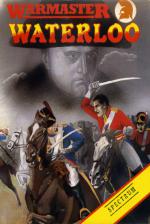 Wargame specialist Lothlorien is back again with an exciting simulation of the battle of Waterloo.

The game is for one player only against the computer, and you've no choice about whose side you're on - stuff you hand in your shirt and put on a funny hat. You're Napoleon.

Napoleon, of course, was the loser, so this is one of those change-the-course-of-history games. The playing area is not large, about three screens in all, with a single battle involving less than 100,000 troops.

The map is unsophisticated but scrolls smoothly and is very clear, as are the units, cavalry and infantry. Artillery does not enter into the game.

As Napoleon, you must launch an effective assault on Wellington's strong defensive lines, occupying two chateaux and a series of ridges. Terrain features vary in their effect on movement and combat, and the essence of the game is to maintain maximum manoeuvrability.

An excellent feature of the game is the option to delegate command of the six French army corps to their individual commanders.

In such situations a commander will take advantage of particular details of his position, and may advise against your orders. Alternatively, you can move each unit individually. The option means that beginners can play swiftly and simply, commanding only a few units, and sending reinforcements when required, taking fuller control when they understand the game better.

At the learning level the game is reasonably easy to win, while we also scored one easy victory at the standard level. At the highest level the English get better morale and higher strength units making victory very difficult.

Four different strategies have been programmed into the game, so you cannot rely on the same tactics twice, and our victory was probably lucky as Wellington seemed to have little stomach for a fight on the day. In the rematch, Napoleon was slaughtered.

Waterloo plays fast and a game lasts no more than an hour or so. While wargame fanatics may find it too simple for purist tastes, it's nevertheless lots of fun, fairly realistic in its results, and ideal for inexperienced wargamers.

While wargame fanatics may find it too simple for purist tastes, it's nevertheless lots of fun, fairly realistic in its results, and ideal for inexperienced wargamers.