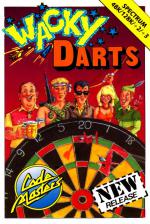 Ruddy flip! This has to be the silliest computer game ever to hit the streets (or the oche, as they say in darting circles).

This is a comedy darts simulator, a concept which only Codemasters could hope to get away with. I can't help thinking that it started off as yet another serious darts simulator (an idea supported by the completely non-wacky title screen), but halfway through everyone got fed up and decided to stir in a bit of silly.

As a result the playing characters include Nevil the Barbarian, a rather clumsy warrior, Jocky Pilsner, the token darts celebrity who has tanked up a bit too heavily to aim straight, Baza The War Machine, a Rambo-style warmonger festooned with machine-guns. Nigel the Ninja, Jeff the Archer and Alf the Alien (who came last in the annual asteroid slalom event for backwards aliens).

You get a bit of biographical detail on each player before starting the match. Each character displays a different playing style, and instead of darts tends to throw objects such as axes, death stars, lasers and bazooka shells. Up to eight players can take part, or you can take on all the computer-controlled characters in a tournament, first beating your opening round opponent in a best-of-three match. You can check out their playing styles first in a series of one-to-one friendlies.

There are two games to play - Round the Clock or 501. In 501, players take three throws each per turn, subtracting your score from the total remaining. The scoreboard indicates the score remaining, and the time left for your shot - dither too long and the shot will be taken for you. You have to end on a double or a bullseye, and if you go below 0 those three throws are discounted and you start again from your previous score.

In Round the Clock, you have to hit each number, starting from 20 and working backwards, ending with a double twenty.

You have a choice of joystick or redefinable key controls, but in both types of game the basic control method is the same; your disembodied hand wavers around in front of the dartboard, and you steer it as best you can. The hand also tilts up and down; when you think you're lined up with the desired section of the target, press fire to launch a dart.

Your opponents take their turns in cartoon-style routines featuring TV camera crews and heckling audiences: with Baza's bazooka shells blowing chunks out of the onlookers, they have plenty to heckle about.

There are some amusingly-drawn intro screens in which a stereotypical TV presenter explains the action ("It's Chris the Human old versus Daniel the Magician in this round!"), and a good routines where you choose your next opponent by hitting the fire button as their portraits flash before your eyes.

Wacky Darts doesn't actually add anything to any of the darts sims already on the market except a cracked sense of humour, but the good thing about it is that it does play as a serious darts game if that's your particular wont. At this price. It's worth a stab.

Zany darts game that adds a touch of madness to the potbellies sport. Great fun!

Zany darts game that adds a touch of madness to the potbellies sport.