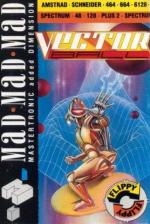 There's a definite danger of becoming horribly complacent in this zany old pot pourri of visual experience that is games reviewing (Wah? - GT). There are times when you feel rather blase about gameplay and graphics. So it's probably just as well that every so often a game like Vectorball pops up behind you and delivers a swift kick to the thought-process.

We've had the wire frame graphics before, and we've had the rolling-ball business, but I can't remember seeing them combined like this. Vectorball has elements of both Marble Madness and Match Day II.

Confused? You should be. Let Uncle Jim explain. Vectorball is some kind of futuristic sport in which the opponents (yourself against either a friend or the computer) try to propel a ball into the other player's goal. Easy so far. Well, the tricky bit is yet to come. Not only are the players virtually impossible to control with any degree of accuracy, but you play on a horribly difficult landscape. There are huge hills and dips and ridges which affect the path of the ball and the players.

From the menu screen you decide which sort of landscape you want to try; ditches and hills, ridges, valleys or an horrific concoction of the lot.

You guide your character in two ways; by directional use of the joystick to simply cover ground; and by rotating both clockwise and anticlockwise and kicking the ball when you are 'in possession'. You determine the strength of the shot by the length of time you hold down the Fire button. As a visual indication, the head of player gets higher and higher the harder you're going to hit the ball. The problem with this mode of control is that as soon as you've got the ball, you can't move anywhere - it works like netball. So, the best strategy is to wait until the ball is in the vicinity of the opponent's goal before taking possession.

Now, controlling the players is difficult enough, playing against the computer is a completely lost cause - but when you're faced with the added difficulties of a wildly undulating pitch, it all becomes a little too difficult to bear. It's also possible to run off the screen, so you don't have the foggiest idea which way you're facing, heading or kicking.

Vectorball is littered with stacks of really nice touches, graphically it's got the feel of something very classy, with the score being projected on to an imaginary scoreboard at the side of the playfield. But really, I don't know whether it's just me, I just found it too difficult.

Whilst there is a huge degree of satisfaction to be had by finally mastering the control of the robot-player, you seem to spend so long watching the computer score goal after goal, you tend to get a little bit demoralised. Still, it's got the highest novelty value - if you can have such a thing - of anything I've seen in a while.

Original, inventive and slickly programmed but hard to play.

Original, inventive and slickly programmed but hard to play.