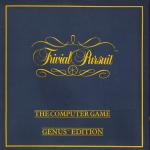 If for some strange reason you didn't get a copy of the board game Trivial Pursuit last Christmas then fret no longer. Domark have just brought out Trivial Pursuit - The Computer Game! It's based very faithfully on the original board game with a few additions and adaptations for the computer.

Like the board game, the basic idea is for players to travel around the board answering questions and trying to collect six wedges, one for each subject. instead ot throwing dice, when a player has a go the fire button must be pressed to release a dart which lands in a numbered section of the screen. The player can then move his or her counter to the highlighted space on the board. Once a player's token lands on a square a question is asked.

Well, the question isn't actually asked by the computer but instead by a very cute little character called TP. TP dons different caps depending on which subject you are attempting. Questions in each subject can be straightforward text, graphical or musical, and when your choice is made, the little master of ceremonies scampers across to the school room and fires the question at you. TP is an agreeable little chap and is full of congratulations if you answer correctly and full of commiserations if you don't. There's no typing in to do - shout out the answer before the time limit expires and you are asked whether you got the correct answer or not. Keying Y for yes or N for no allows the game to progress.

An option menu heads up the game. The first thing to do is enter the names of the people playing, which governs the order of play. A game can be continued or restarted. To make things just that bit more competitive you can alter the amount of time available for answering a question. The real star of the show is TP, but he can be sent to bed if you want a bit of peace and quiet - after all his job is very tiring! You can also turn the sound down if you're planning on playing late into the night and don't want to keep the neighbours up.

Even though there are lots of questions in the basic game, eventually you will have attempted them all. When this happens, a new block of questions can be loaded from the second cassette in the package - and further cassettefuls of questions are promised.

The screen layout is very similar to actual board game. There are six sections, each representing the different question subjects which are Art and Literature, Science, Geography, History, Sport and Leisure and Entertainment. At the top of the screen in the right hand corner a chart shows how many wedges each player has won. When a set of six wedges has been collected the aim is to try to get to the centre of the board and complete the game by winning.

As in the board game, a player can only compete for a wedge when the counter has been landed on one of the subject headquarters. In the schoolroom TP asks you questions. A clock shows you how long you've been playing and a candle reveals how much time is left to answer the current question.

One feature on the computer game that isn't present in the tabletop version is the score board which keeps track of each player's performance and can be consulted at any stage to see how everything's going and who's currently in the lead.

Now, which sport was it in which there was an outcry when skirts were raised...?

Control keys: redefinable: up, down, left, right, fire
Joystick: Kempston
Keyboard play: no problems
Use of colour: tidy
Graphics: clear - fine for a boardgame
Sound: basic, nothing superb
Skill levels: one - but additional question tapes will be available
Screens: main board screen plus menus and 'visual' questions