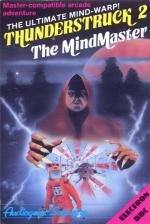 Audiogenic reaffirm yet again their new-found commitment to the Beeb, following on from the successful launch of Psycastria, with another excellent arcade puzzler from the prolific Peter Scott.

Last month brought us his Last Of The Free and Thunderstruck; now the sequel. Of the three reasonably similar games, this is undoubtedly the best. In common with all of Scott's work that I'm familiar with (Hunkydory was another of his!), the game fatures large, satisfying, flicker-free graphics, a series of puzzles, humour and a very compulsive quality.

However, this game manages to take all these qualities and improves on them with a new sprite system (some 50% larger than the fairly massive ones he's already well known for) and some very detailed effects in its 130+ screens.

The standard plot involves searching a large space complex for parts of a 'DeactiUnit', but, of course, that's just an excuse for a series of object-based puzzles and a large game to explore.

If you know Scott's work and like it then you'll need no further word from me, if you're unsure then this could be the game to convince you and if you've never had the extreme pleasure of playing one of his creations then I wholeheartedly recommend this one, with the hope that he'll try some other sorts of games in the future. I've had a lot of fun playing this and I think you will as well.

I wholeheartedly recommend this one.