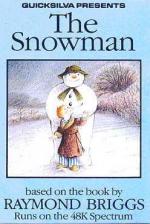 The Snowman is based on episodes from Raymond Briggs' book of the same name - a very gentle comic strip story which uses absolutely no words, and conveys the story entirely in its pictures.

The game comprises four stages, each with its own screen layout. It falls into the category of a platform game. In stage one you must collect six pieces of snow and drop them in the correct place, which results in the snowman being gradually built. There are gas flames darting about which will melt the snow If you touch one after picking it up and replace it elsewhere on the screen. Collecting an ice lolly earns a bonus and at the same time enables you to freeze a flame while the bonus is being counted up. Other objects award points - Christmas crackers, presents, stockings and a tree.

Stage two has you trying to collect the snowman's scarf, hat, nose, buttons, eyes and smile, but there are sleep monsters trying to put you to sleep - an alarm clock will freeze one temporarily. Stage three, and it's the snowman's tie, glasses, trousers, torch, skateboard and balloons, and again the sleep, monsters are on the rampage.

In stage four you must collect six ice cubes to stop the snowman from melting, but the gas flames are back again. In all four stages your energy is depleted and must be replaced by eating food which appears randomly for a few moments. That gets you going, but the next part of the game has a different screen layout.

'With fourteen ledges and twenty 'ladders ' in the first screen this turns out to be no namby-pamby game at all. It 's true that the monsters aren't actually chasing you, at least the gas flames don 't try and 'get you', but once you have that snow, it 's a fraught business getting is safely to the dropping point, especially when energy is falling and there isn't a christmas pud or turkey to eat in sight. Accuracy is essential when changing direction and it's very easy to fall off a ledge, which results in 'you' falling all the way into your bed at the base of the screen. Surprisingly addictive.'

'This is a very original game idea, although the basic format is quite a familiar one. I found it a little irritating at first that it 's so hard to line your man up to change direction - you are forced to keep the change of direction key pressed while still moving in the first direction, so that the change is made automatically at an intersection. This, all too often, results in falling off a ledge! On the other hand it does increase the skill required. I soon found that the keyboard is best - the finickiness of control seems even worse with a joystick. Despite the control problems, The Snowman turns out to be a frustratingly addictive game. Good!'

Despite the control problems, The Snowman turns out to be a frustratingly addictive game.