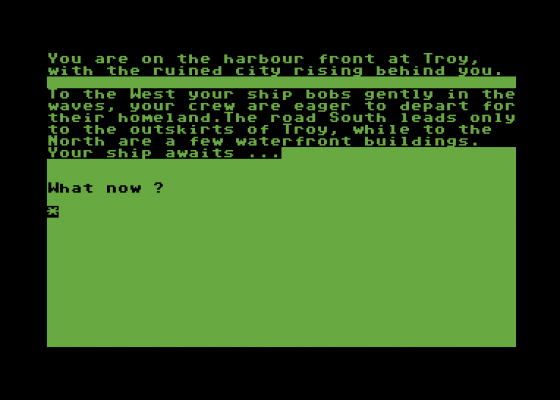 This is the latest effort from the den of Duckworth, producers of such all-time classics at Mountain Palace Adventure and Castle Dracula. It changes hands for £9.95 and comes in a bulky video cassette sized case, with two cassettes and minimal instructions on the back of the packet.

In fact, the minimal instructions are a subtle hint about the quality of the game. We've become accustomed these days to wading through pages of blurb on how to communicate with the latest whizz-bang parsers from Level 9, Melbourne House, Infocom and others, but Duckworth are still in the verb-noun era, so there really isn't much to say, apart from telling you to hit the SHIFT/RUN STOP keys to load the game, and how to SAVE a game.

The Odyssey is divided into two parts. The story has been adapted by Mike Gerrard from the very stuff of myth and legend, and has you taking the role of Odysseus, sauntering off into the sunset after having a good old sack of Troy. You beetle home across the foam to be united with your faithful wife Penelope in far-off Ithaca, only to discover that everyone else wants to be united with her as well, whereupon you must show your true colours and send the dogs running. 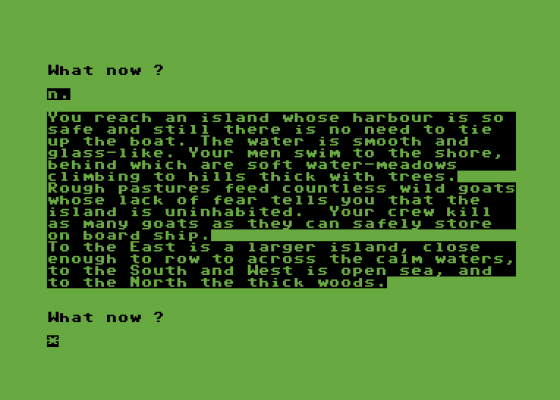 So, there's no shortage of plot here, my magical friends. What's more, on the way home you are confronted by all the usual Homeric horrors, from the lotus eaters (a bit of a yawn, really) to Scylla and Charybdis (monster and whirlpool respectively). The blurb on the packaging claims that there's 80K of text here, which sounds good and indeed the location descriptions are certainly longer and more detailed than previous Duckworth offerings. However, I wasn't able to finish the game in the time provided, so I can't be absolutely certain whether the aforesaid 80K means 80K of compressed text (ie, a lot) or just 80K of ASCII code (not a lot, by todays standards). Knowing Pete Gerrard's programming techniques, I suspect that it may be ASCII -- ah well . . .

On the subject of programming and game design, the news is both good and bad. First the good news -- there's no doubt that this program is streets ahead Duckworth's other efforts. Although it's rather slow in operation, the text is convincing and the presentation on screen is neat and tidy. Unfortunately there are no graphics, but that doesn't matter as much as it might because of the strong story line.

However, and here's the bad news, this, adventure is still unacceptably old-fashioned in its basic structure. The market has grown out of verb/noun games that don't tell you which words they can't understand, and restrict a player to only, essentially, examining and using objects. What we need are more routines garnered from artificial intelligence (as in Suspect) and better coding to speed the whole thing up, combined with efficient text compression to give us not just twenty words, but two hundred for a location description (if it's a text-only game). Come on Gerrards! This subject could have been meat for a real humdinger of an adventure - Mike's got the penmanship, so tell Pete to sharpen up his programming practice a bit for next time.

Still, it's not a bad game, this one. After I played Mountain Palace Adventure I really thought I'd never pick up a Duckworth game again, but The Odyssey has persuaded me that there's life in Gloucester Crescent, NW1 after all. But £9.95... Phew! Even if you do get two cassettes, I can't help but feel that I'd rather fork out an extra quid or two for a copy of Zork I, II or III on disk from Commodore...

Not a bad game... I mean, after I played Mountain Palace Adventure I really thought I'd never pick up a Duckworth game again! 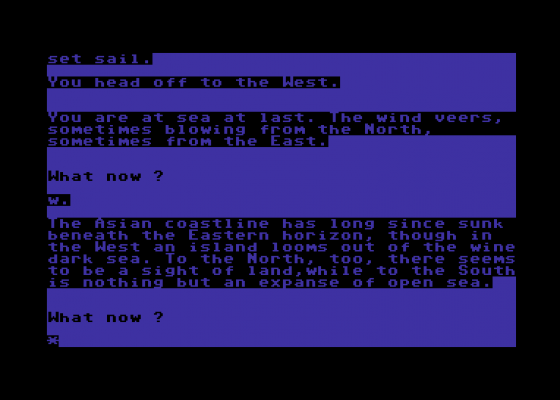 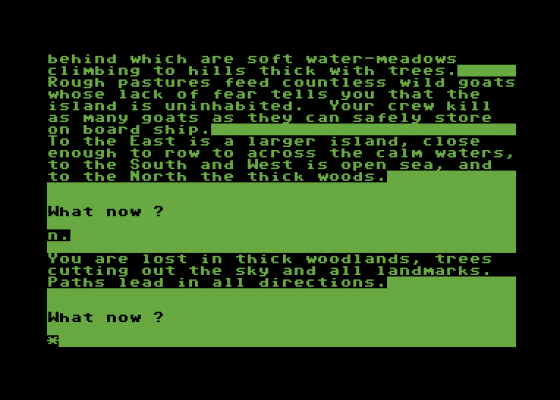