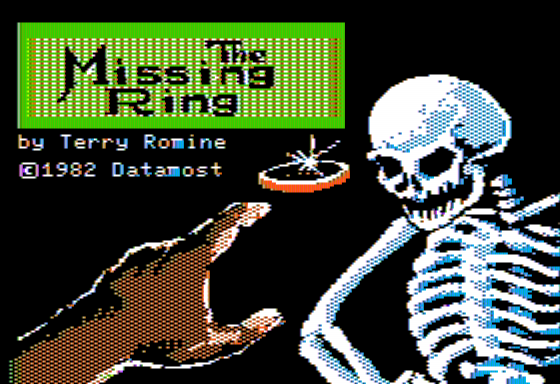 There's a Hoyt Axton song with the delightful refrain: "Work your fingers to the bone, what do you get? Bony fingers!" and it comes to mind after the marathon session of The Missing Ring I've just completed. I've fought orcs, goblins, fire beetles, hell hounds, an Evil Mage and several other varieties of nasty. I've mapped all the rooms except two (which seem totally impenetrable), amassed vast quantities of gold, gems, keys and magic items, and now I know why it's called The Missing Ring - I can't find the damned thing anywhere!

Apparently, if you believe the instruction leaflet, there is a fabulous magical ring somewhere in the enchanted palace and it is your job to find it. Up to five characters can join in the earch, and since these are independent it's possible for five players to play a game. Or you can play alone and control up to five characters yourself.

This gives you the opportunity of going "mob-handed", or you can have your characters going separate ways if you want. There are two complete sets of control keys, so two people can play a game easily if they don't mind being very close. With five players, I think it would get a bit like musical chairs! 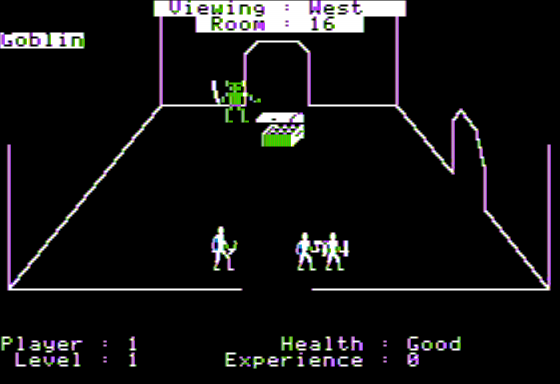 The party for any game can be made up from a set of nine characters - elf with bow, dwarf with hammer, president with "destruct" button, the usual sort of thing.

If you have any characters from previous games who have made it out of the labyrinth they can be pressed into service again, replete with gold, experience points and all the other trappings of adventuring which they have earned. Each character has its own distinctive shape to move around the labyrinth, although they're so small that it's hard to tell a hammer from an axe in the heat of the fight.

Wizards carry a staff, and dwarfs are smaller (no, really) than other races. The characters have different stances for left and right movement, and also a fighting stance with bow or whatever at the ready. When it is a character's turn to move, it flashes on the screen. In fighting stance, this gives me the impression the character is jumping up and down, which is amusing. 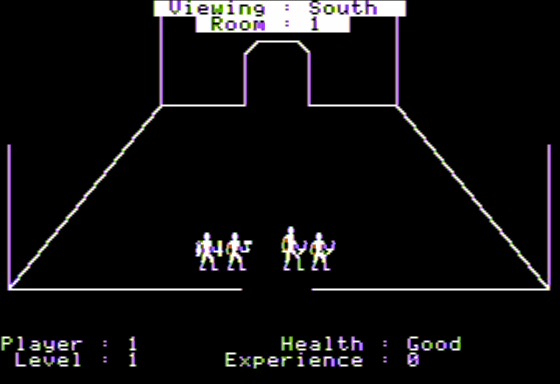 However, you can't laugh too long before there is a time element to each move. If you delay too long, either you can't move very far or the play passes to the next character. With five characters all in one room, play moves along at a reasonable pace. Things slow down a bit if they have all split up because a different room has to be generated for each.

You can work up quite a lather trying to get a few characters to the scene of a fight to lend a hand. Attacking is quite easy, involving no more than a space bar unless your fighter has a bow. In that case you are given a cursor to position before releasing the arrow with space bar.

However, unless you've got a bow you must be right next to the nasty before you can attack. With five characters all attacking the same large nasty who is positioned over the treasure chest, the resulting blob is hard to distinguish! 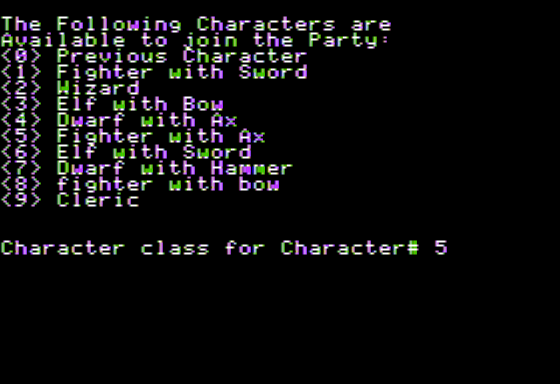 As well as the nasties already mentioned, there are also some interesting variations on old themes. For example, there is a "skelleton" and a "wraight", all of which suggests that the ring is sat on top of the dictionary.

As with most games of this type, I find the fighting a bit boring. (No doubt the random number generator has a whale of a time.) Fighting apart, Missing Ring is fun if you like that sort of thing, and finding the ring is obviously difficult.

Unfortunately, I had other difficulties with the game which detracted from my enjoyment of it. For example, my saved games had a habit of mysteriously disappearing, which tended to make me jump up and down like the characters. On a couple of occasions the game hung completely and had to be rebooted, and once I had booting problems which took a couple of tries to get past.

There also seem to be some program features which took me by surprise. For example, the amount of gold a character had varied while at the Merchant's, even without buying anything. In fact, the gold accounting seemed generally lax, as did the medical diagnosis.

On one occasion I found a goblet and drank from it. I was informed that I "feel better" yet my "health" remained unchanged.

Funnily enough, the same thing also happened when I drank what I was then informed was "poison".

With eighty rooms to visit, some locked and some with secret doors, The Missing Ring is not a five-minute game. It took me five minutes of casting spells and hitting the space-bar to dispose of the Evil Mage.

If I'd had more success with the "save" facility I might have enjoyed it a whole lot more.

If I'd had more success with the "save" facility I might have enjoyed this a whole lot more. However, with eighty rooms to visit, some locked and some with secret doors, it's certainly not a five-minute game. 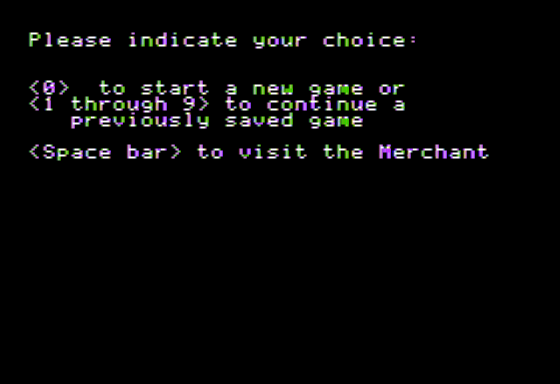