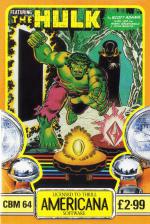 Look, I'm sorry, True Believers, but I just can't take this Scott Adams number any more. The games are tripe; the games are finicky; the games are prehistoric; the games are illogical; but in this case, fellow Wizards, the game is cheap. So does that make it worthwhile?

Fans of Scott Adams will doubtless already be reaching for their wands with the idea of turning me into something small and slimy, while others will be wondering what in the name of Belboz I'm on about. Let me explain...

Scott Adams, bless his heart, started programming adventures on the TRS-80 back in 1978. His games still bear the hallmarks of those early days - and in the case of Hulk that means two word input only, a vocabulary of (at most) 150 words, strange illogical puzzles, and a parser that simply responds with "Sorry, I don't understand what you mean" if you mistype a command or use the wrong word.

Ol' Scott then conceived the idea of doing a series based on the Marvel superheroes. Unfortunately he applied the same old techniques and the result was a couple of games (The Hulk and Spiderman, followed by The Fantastic Four) that had a reasonable marketing success but were, in all honesty, pretty poor adventures compared to what the opposition was offering. Scott's games are, I think, best described as puzzles rather than adventures - they have very few locations, lots of tricky situations and require considerable lateral thinking (and luck).

The Hulk is no different from the rest, except that now you can get it for £2.99. Meet Dr. Strange, Ultron, and Nightmare as you attempt to unravel a scenario that would confuse even the most experienced wand-wielder. At the price, this game is worth a second look - a Scott Adams game is something of a 'must' for any seasoned adventurer, and if you haven't played any then it's probably worth the impulse to buy. But if value for money isn't so important to you, then remember - this is an 'old-fashioned' game and for some that will mean it is, by today's standards, a bad one.

This is an 'old-fashioned' game and for some that will mean it is, by today's standards, a bad one.