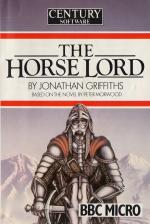 This is a "bookware" pack. The book, by Peter Morwood, is a fantasy novel which is just about readable - at least your conscientious reviewer read it - but scarcely in the Tolkien class. The published price of the book is £2.50 which means that they are charging over £10 for the accompanying program. At that price, with a fantasy book, you'd expect a pretty fantastic adventure game, right?

Wrong, what you get is a mediocre arcade game. Apart from being rotten value for money, I don't see how even the best of arcade games can sensibly be packed with a book, because they have so little meaning. There wasn't even any text or instruction included in the program to indicate the relationship between the book and the game, and my review copy had no documentation with it.

The game involves riding around a spiral path and then zooming into a close-up screen when an obstacle is encountered. These are remarkably similar, involving the crossing of streams and combat with an opponent - apparently on horseback - but the graphics are vague. The same weapon seems to serve as both sword and crossbow. The controls for rotation, movement and weapon-yielding are not described since there is no instruction program. Having discovered them empirically, I found both keys and joystick version to be virtually unmanageable.

This is possibly the worst value for money package I have ever seen. Anyone who has been conned into expecting a high quality adventure game and parted with their money should demand a refund from the publisher.

The worst value for money package I have ever seen... Demand a refund from the publisher.