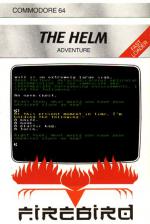 Gilsoft's adventure generator The Quill is both the bane and the bounty of adventures, allowing many more people to create them but unfortunately also allowing the odd tacky adventure to be released.

The Helm isn't one of them. It's an example of a really well put together game providing lots of humour and plenty of depth. Your quest is for the Helm of Immortality and it starts in the surroundings, most unbecoming for this wizard, of a primitive hut.

The major feature of the game is that it's full of really cute responses which alternatively inflated and deflated my ego. When waiting for input the computer addressed me as a 'sylph-like cosmic being', 'your absolute brillianceness' and it even said 'I patiently and eagerly await your next wondrous command, O all intelligent one.'

Now, this is my sort of computer: obedient, grovelling, and slave-like. My beard dropped somewhat, however, when asking for help or inputting words not in the vocab list. Both are met by unhelpful, if not damned impertinent replies that nearly made me choke on a bat wing.

The humour, good as it was, risked being repetitive, but I found I just ignored the useless bits of text after a while. The actual location descriptions are usually quite good with coloured text but no graphics.

The game is limited to the old-fashioned two-word inputting - you have to use simple phrases like 'Tie rope' and you're just lucky if you've got the right object to tie it to.

The puzzles that have to be solved include some code-breaking and a rather obscure discovery concerning a thick fishing line.

When the program can't act on an input, it has two types of response. One is where at least one word appears in its vocab list and the other is where no words are recognised) and you get cheekily ticked off for not using the Queen's English).

It obviously doesn't match the more expensive disk-based games, but for £2.50 I think it deserves a place in any adventurer's collection, particularly if you enjoy a really sycophantic computer doing your bidding.

Deserves a place in any adventurer's collection, particularly if you enjoy a really sycophantic computer doing your bidding.