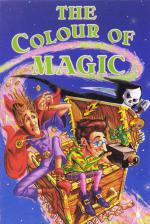 The Colour Of Magic

It's a strange world. Discworld that is. It's sort of flattish and disc shaped. Then there are the elephants - four of them, who support Discworld. Of course, the whole arrangement is carried on the back of a giant turtle called Great A'Tuin through the vastness of space and time.

It's a strange world, as I said.

Strange worlds are invariably inhabited by strange people. Meet Rincewind. Rincewind is nearly a wizard. Unfortunately, he has a spell permanently stuck inside his brain as a result of a training accident. He can't even pronounce it, so the spell isn't exactly useful. He's permanently down on his luck. But as life would have it, things are to change for Rincewind. The change comes in the form of the world's first tourist, Twoflower.

Twoflower is the kind of guy who drags minor disasters around with him as if some kind of repertoire is required. The recipients of these disasters are usually unsuspecting innocents, like Rincewind. He also has a chest full of luggage - with legs on. Well, hundreds of little feet actually. Still, it makes a change from the usual castors. Twoflower hires Rincewind to be his guide. Twoflower is also quite well off ...

You play Rincewind. You receive a brief from the ruler of the city of Ankh-Morpork to look after this 'politically important' person and the adventure proper begins. It's a Quilled game in several parts that has you hopelessly wrapped up in circumstances which are either out of control to start with or become so in a disturbingly short space of time. It has graphics on the top third of the screen display, but these add little to the adventure. In fact the visuals are the weakest part of the game. Trendy they may be but their unsuitability for this game stands out like a sore thumb.

Authors McNeill, Child and Buckett do their usual best to overcome both the limitations of the vocabulary and the parser. Rarely does the player have to resort to guessing the syntax, though perhaps some of the response messages could have been a little more helpful. Limited character interaction is possible with the 'Talk to ... ' command. Otherwise the game plays in a very similar fashion to its predecessors, The Boggit and Robin of Sherlock. In other words, single command input (preferably two-word) is called for.

The various explorations, despite being intrinsically hazardous anyway, are further complicated by the best feature of the game, Death. Death has actually bumped into our heroes anyway due to a cock up in his timetable. As a result, he's extremely upset and you know it's only a matter of time before he returns to settle things once and for all. In fact, the game lives up to the reputation of Terry Pratchett's novel very well. Those who aren't familiar with the novel will probably find themselves rushing out to buy it after playing the game. Funny as it is, you will want more.

More importantly, it's a good adventure in spite of (and not just because of) the gimmickery. It takes fantasy adventuring into the hitherto little explored regions of Discworld and I think most people will enjoy the trip. The price is right. Though as a parting thought, my criticism of Delta 4 is similar to that of St Brides last issue. They should really leave The Quill behind - along with its limitations - and go for a more sophisticated system. Adventures written on that aging utility cannot expect to survive full pricing for much longer.

The Colour Of Magic

A good adventure in spite of (and not just because of) the gimmickery... Lives up to the reputation of Terry Pratchett's novel very well.