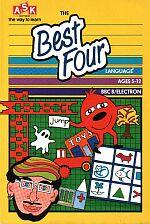 Advanced System Knowledge, successful publishers of educational software for the BBC since autumn 1983, have combined four of their titles on one disc with new documentation for parents, teachers and children, activity and story books. One set is for language teaching, the other combines maths programs.

The four language programs are Words Words Words by Tom Stonier, Hide And Seek by Gloria Callaway, Facemaker and the by now quite famous Podd, by Don Walton.

In Words, children are invited to correctly type in their choice of place or object. ASK have always stuck by the educationally sound policy of insisting that keyboard input is correct before it is accepted. No adventure spellings here. The choice list appears on-screen.

Various "rewards" are built into the program for completely correct spelling within one of the scenes within the descriptions build up.

Hide And Seek is a very enjoyable program. The game presents a group of boxes containing various nicely drawn objects. It then hides them. Guess where they are. Variations on this theme thoroughly entertain and test young children. Their minds are often better suited to these tests than those of their parents or teachers. Try it and see!

Facemaker offers numerous choices of size and type of face and features. The description has to be read and further options taken or discarded. Unfortunately, there is no printer option for this entertaining program.

Podd has proved very popular with children and also found favour with educationalists, becoming an award winner. Podd is one of those characters we all take to. The program prompts children to type in single actions (game one) or several actions (game two) for Podd to perform. If Podd knows the word, he performs. There are two Podd storybooks in the pack, Podd Arrives and Podd's Adventures. They provide independent material for children to work on, resulting from Podd's "open-ended" character.

The documentation includes word lists and suggested projects for parents and teachers and the activity book is for use in conjunction with the programs. It provides pictures, puzzles and quizzes. These books are produced to a high standard.

It's certainly a good idea to package these games together. It makes sense for the school especially, although also for any parent looking for maths software to encourage interest in a child just beginning and likely to rekindle lost interest in themselves!

Squeeze is a very simple game: you have to cram as many shapes into a given board size as you possibly can. The shapes and the board sizes constantly change so you can play an enormous combination of games. Puzzles, shape cards and activity book extend the usefulness of the software.

Number Puzzler contains games based on mental arithmetic. Its flexibility allows for a single player versus the computer or a number of players, numbers up to 9 or 99, subtraction and/or addition, a game similar to noughts and crosses, the creation of a magic square and setting a self test quiz.

Table Adventures takes a rather formidable memory test and brightens it up with graphics and some imaginative game scenarios involving numbers. Once again there is a self test option so that teachers can set up relevant quizzes associated with the games.

Number Painter employs keyboard or joystick in a game worthy of the title "arcade". The painter has to speed around the building site colouring in the correct combination of numbers to make a target number.

The concept of arcade game levels is extended to increase the difficulty of the calculations involved as the painter progresses.

The activity book and two further books of Brainteasers and Mind Benders complete the maths package.

ASK's motto ought to be "Make Learning Fun" because that is what both these packs do. They break down any problems of understanding by making the activities enjoyable (the high standard of programming helps greatly in this task) and the competitive edge of the programs is backed up with a plentiful supply of follow-up material.

Compilations usually mean spent material but not in this case. ASK's sound educational and programming standards have been applied uniformly across all these programs and bringing them together seems very natural. The addition of support material makes this very attractively presented software an especially good buy.