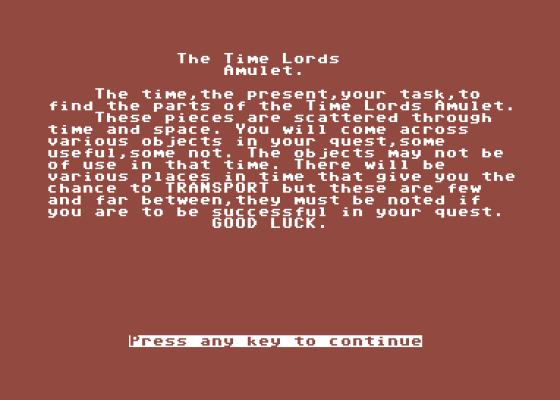 Upon receiving The Amulet from Sentient software I prepared myself for the mundane, as the White Wizard is always sceptical of Quilled budget adventures. The Quill is a clever utility, but it can lead to sloppy adventure programming and slack storylines.

I commanded a minion to perform the loading ceremony and pondered on the mechanics of turbo load. The minor loading person soon scuttled back whining about inabilities to perform the ceremony of C2N because of a faulty cassette. I examined the cassette myself to discover a Spectrum version on one side and the Commodore version on the other. The mindless lesser being had been trying to load the Speccy program... Ignoring this idiocy, I informed said minion of his foolishness and waited with impatience.

Once loaded, the scenario was revealed to me. I had been bestowed with the task of finding the three parts of the Time Lords' amulet that have become scattered in three different time zones. I know these Lords well, for they are careless beings who are always losing objects of worth and without them (and some friends like them) adventuring would hardly have got off the ground in the first place. A few hints are also given which should help with the final solution.

Pressing RETURN led me into the game. An elementary puzzle was immediately presented that should provide no problem to the experienced explorer and took me mere seconds to solve. A fishing rod was before me, and on taking it, I discovered the amulet to be hanging at the end of the fishing line. It looked dirty, a hint if I've ever come across one, and so being a wizard wise in the ways of cleanliness I gave it a good rub. This kindly action transported me into one of the three separate scenarios, each containing a part missing from the amulet.

A tricky problem that needs to be understood is the way in which objects are freely scattered throughout the three separate time zones and that objects in one zone may well be needed in another. Great problems may be caused by this. Points of interest include a Frenchman who upon being EXAMined informs you that he enjoyed the close attention. Kissing him results in an even stranger retort. The White Wizard became much amused. The amorous Frenchman resides in the French Revolution period - one of the scenarios, whereas the other two are presented by the prehistoric past and modern times.

The problems presented proved themselves worthy for even my metaphysical capabilities. The program's vocabulary is sparse and gap-ridden, a result, I fear, of being a son of The Quill, although as I have already said, not necessarily a fault of The Quill itself. But once you've deciphered the author's train of thought, things become more obvious. The location descriptions are generally sparse and not particularly atmospheric. However, comprehensive SAVE and RESTORE functions are included; as always this increases the esteem of any adventure in the eyes of the White Wizard. All in all, The Amulet proved itself worthy of any mortal's attention, especially at the meagre few groats that is being asked for it. Even the contaminated B-side holding the Spectrum version may make a few misguided mortals happy.

Worthy of any mortal's attention, especially at the meagre few groats being asked for it. 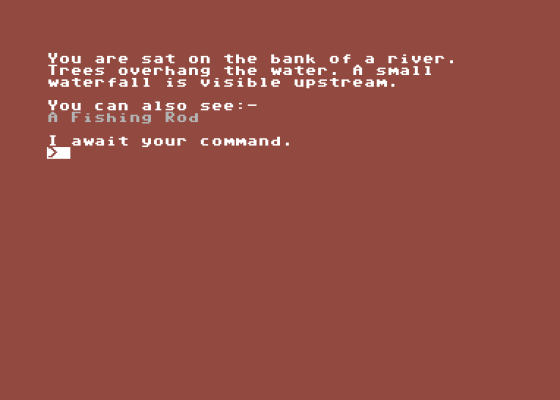