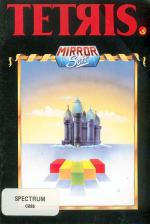 Tetris is the sort of game to give you nightmares. It's the sort of game to provoke newspaper headlines like "My son's mind warped by geometric fiends!" In the mould of infuriating wonders like Rubik's Cube and September (shortly to appear from Activision) Tetris is quite the most maddeningly addictive and original game I've seen, ooh, all month.

Its Russian origins (hence funny "R" in the title) are entirely irrelevant so I'm sorry I mentioned them really. (What are you talking about - Ed?) Apparently it was invented by a cosmonaut on his coffee break or something.

The aim of the game is very simple indeed. From the top of the screen fall assorted coloured blocks - straight lines, 90 degree corners, straights with corners etc. You have to rotate the pieces as they fall and move them horizontally so when they reach the bottom of the screen ail the sides touch each other. Gradually the platform gets higher and higher until it reaches the top of the screen and... the game ends.

Hang on. I must have missed something here. Yes, OK, so all the pieces aren't exactly touching each other. Yeah, so there are a few gaps here and there. Oh, I see. If I make the bits fall so they form a line along the bottom of the screen unbroken by gaps, that line will disappear, my score will shoot up and all the other bits will fall down one level. Now I've got more room to make more lines before I get to the top of the screen. I see...

Obviously, you'd have to be some sort of genius to continually manage to make the bottom line fit just right; the bits just don't fall in a convenient order, and so the trick is to put each piece in a position where it will do most good to a number of lines at once. Sticking that "L" shape in the hole one way up may complete one line, but by rotating it through 90 degrees, you might be able to slide it in to bridge most of the gaps in three lines.

Depending on which level you are attempting (1-5 - chosen at the start of each game) the pieces will fall at an equivalent speed. I defy anyone to complete a line on Level 5 without cheating.

Extra points can be had by pulling the joystick down when you're happy with the piece's horizontal position and it's still a little way up the screen. This will cause the piece to fall down at a much faster - though uncontrolled rate. This is only recommended once you've got the hang of the game.

Tetris may be absolutely brilliant to play, but, it has to be said, it's not the prettiest game around. The blocks are made entirely out of attribute squares, and with the colour on the TV turned down you find yourself - visually, at least - back in the days of the ZX81.

It doesn't matter Who cares!

Apart from being highly original. Tetris is very playable indeed. The random order of the pieces ensures that decisions must be made almost instantly, and the simplicity of the controls (left, right and rotate) make it easy to get started. There aren't the pages of rules and regulations found in most strategy games, and, although I never thought I'd say it, it does make a change from shooting things all day.

Considered opinion: The most original and playable game in an age. A strategy game where reaction time and dexterity are crucial.

Simple to understand and nigh on impossible to beat. Lightning reaction game, very; very addictive. Superb.

Simple to understand and nigh on impossible to beat. Lightning reaction game, very; very addictive. Superb.