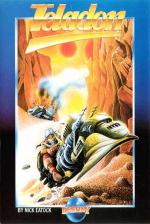 I've heard of being conceited, but this guy really goes too far. I mean, just get a load of this plot. You're trying to quench the reign of terror laid on by an evil ruler whose name is Teladon. Hence the name of the game, you may think, but read on. The moon he rules is also called Teladon. (I bet anything you like the big head named the moon after himself. I wouldn't be surprised, you know what these megalomaniac leaders are like). It's a wonder we don't live in Thatcherland, oh yes, a little bit of politics, a little bit of politics, very funny, I, don't, think (quick Ben Elton impersonation there)!

You set about destroying the evil ruler simply by building a bomb. How do you build a bomb? Well, first you've got to find the pieces to make it. These pieces are hidden deep in the bowels of the game, which represents the most impressive technical breakthrough seen on the Spectrum for several years. Why do I say this? it's because the game is set on 2 entirely different environments, giving the game a unique variety in gameplay. This is what the blurb tells us.

Now let me tell you what the game really has. Yes, it does have two sections, both entirely different but neither are really wonderful. The first section has you flying down a long canyon avoiding walls and nasties, looking for the lift down to the second section. Lift? More like a hole if you ask me!

Take a look at the screen shots on this page. Look very nice, don't they? But to be honest, it's not very nice to play. The bike is very hard to steer and the cross hairs which control your laser are very, very difficult to use. You find after a while they move to the top of the screen, and as the control to make them come down is the same control to stop the bike, you find yourself stopping and starting a lot. Also, when you are travelling at high speeds, you can be easily knocked into walls in such a way that you lose at least 3 lives before you've even moved. Very frustrating.

The second level is also 3D, but we're talking 'isometric' here. Your hoverbike has turned into a plate with a bit of lego on the front and you are even more uncontrollable than you were before. For some reason, the computer can't make up its mind which way the joystick controls are meant to move. And, in this part, you don't get a gun either, you can only duck and punch. Booorrrriiiinng!

One thing that springs to my mind is that Teladon, despite all the blurb, doesn't really give Spectrum owners anything new. In fact, I found it to be very much like 2 average budget games stuck into one full price game.

A very well thought out concept but the game itself doesn't hang together well enough to receive high merit.

A very well thought out concept, but the game itself doesn't hang together well enough to receive high merit.