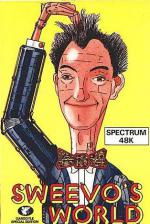 WHEN GARGOYLE steps down from its soft opera sagas such as Dun Darach or Marsport and indulges in a little light relief, the result is Sweevo's World - the last word in Ultimate lookalikes, and full of little jokes aimed at those heavy arcade-adventures Knight Lore and Alien 8.

SWEEVO stands for Self-Willed Extreme Environment Volitional Organism or some such nonsense. In fact, he's a very stupid robot sent out to clean up other people's messes. He has a short tubby body, an overlong neck, and is supposed to look a bit like Stan Laurel of Laurel and Hardy fame.

When you load up, you get a choice of four entry points, called Really Free, Lonesome Pine, Fingers and Apple Pie. Those mirror the standard Ultimate system of having four entry points to the game but in this case you get to choose - which makes mapping a lot easier. The names also alert you to the sort of humour you're likely to find. Lonesome Pine catapults you into a room with a single giant pineapple, while Really Free has three cotton reels in it. Real - reel, three - free, geddit? Oh, never mind.

The fruit motif - borrowed from some intergalactic fruit machine, with cherries and apples as well - is very strong. All fruit is deadly, and thus provides most of the main obstacles. You have to progress through the network of rooms dropping tins in strategic places to hem in baddies or give you access to other, more useful objects.

As you might have already guessed, there are four separate levels to the game. Those are interconnected with pads, which flip Sweevo upwards, and holes, down which he drops, gracefully opening an umbrella to parachute onto the floor below.

Those ups and downs give the game much of its strategic play, because many of the puzzles are quite insoluble until you discover that there's a hole on the floor above which drops you on the other side of some impassable barrier. That is lots of fun to watch and also gives you the feeling that there's plenty of things to do if you can't solve a particular set of problems. I suspect, however, that a full solution to the game requires you to organise your movements rather more precisely.

After wandering about admiring the fruit I started to get into the problems. In typical Ultimate fashion, programmers Greg Follis and Royston Carter have avoided telling you too much about what you're supposed to do. "Scoring is very complex and largely irrelevant," they say on the cassette insert, which just about sums up those silly percentages and points you get on Underwurlde which have very little to do with beating the game. In Sweevo's World you get marks for tidiness, a percentage, and also marks for Wijus wasted, Tyrants trounced, Minxes mashed and Geese ghosted. Also you can win Brownie points by, naturally, disposing of Brownies who sit in inaccessible places and brood, head in hands, completely motionless.

The WIJU is a Waste Ingestion and Janitor Unit - a disc-topped robot - which is your main target, but what will destroy it? The tyrant has a moustache and struts around with one hand waving in the air. No prizes for guessing who it represents - Sinclair User's own beloved publisher, I reckon. Then there's the horrible little girl, like a deranged Barbie doll, and the Goose which laid the Golden Erg. The Goose is the harmless one, and a source of energy if you can say "Boo" to it. Collect the Boos...

Other objects include teddy-bears and the famous Knight Lore boot. You'll have to work out which monsters the various objects deal with, and how to use them effectively. What you cannot do is push the objects around, Ultimate-style. But the problems are nevertheless very complicated when you take them as a series, although I found at least half-a-dozen immediately soluble ones when taken on their own. It's getting them in the right order and not wasting all your tins too soon which is important - some of the tins will be lost, and if you use them up in those places first then you're going to run out later on.

The graphics, in brutal comparison with Ultimate, stand up to the test very well. Although you cannot push things around, there are extras to compensate, such as the teleporting between floors and lifts which emerge from the floor to give you a leg up to some higher set of blocks. While there's less animation than in the Ultimate games, what there is is faster and smoother.

There are also plenty of surprises which I find much more entertaining than some of the awful puns Roy and Greg insist on stuffing into their games. Typically, things like lifts and teleports get hidden behind fruit or building blocks, so you can't see them until you step on them.

The most gruesome of all the motifs is the finger which pokes up through the floor in a whole number of rooms, turning apparently straightforward puzzles into difficult mazes. Then there are static guards which pop up and block off entrances or routes - those only disappear when you leave the room, which is then reset.

Gargoyle is calling this a special edition, and selling it at £2 less than the mainstream Gargoyle products. That's a bit of cheek as well, because it makes Sweevo's World £2 cheaper than the top-of-the-range Ultimate stuff.

What's the verdict then? While Gargoyle has not tried to emulate the full animation of the Ultimate games, with the movable blocks and variety of monsters, it has produced a much, much funnier game with quicker movement and a what-the-heck feel about it, which really does succeed in poking fun at the sometimes pretentious Ultimate sagas. Buy it and enjoy it and try not to take it all too seriously.

A funny game with quick movement and a what-the-heck feel about it... It really does succeed in poking fun at the sometimes pretentious Ultimate sagas.