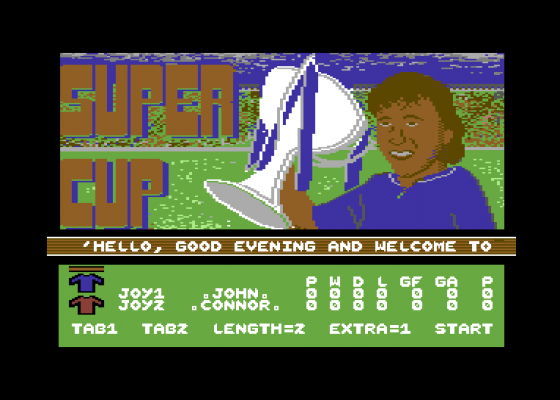 Taking into account parallel universes existing in a single blade of grass, it is entirely possible that millions of lives can be wiped out in one single football match. With current video-game trends, it seems perfectly obvious that a football simulation should be made available... Ah, my fabled multi-level pencil bender. The custard's fine, Doctor Crapulence gibber, gibber... (This comment has been brought to you by Maff's Hatstand Products Inc, third balloon on the right, Moonpie City).

But seriously folks... Rack-It's latest release is an overhead scrolling football simulation for either one or two players against the computer. A number of options can be selected to alter the game, including strip and pitch colours, pitch texture and difficulty level.

Also available is a curved 'banana' shot to swerve around players. Every time a goal is scored, the player is notified by a large flashing GOAL! message and a suitably retarded footballing tune. 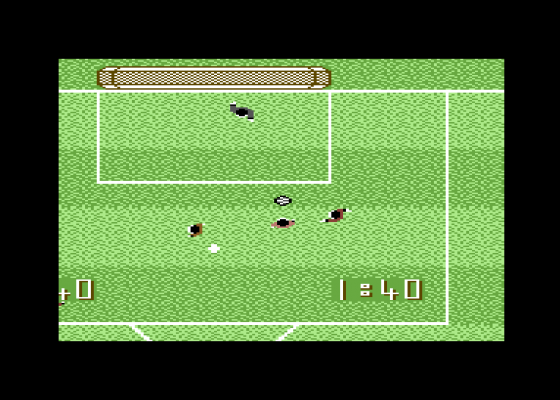 Hmmm... this is very reminiscent of European 5-A-Side, except it's a much better interpretation of the overhead-scrolling footy sim. Presentation-wise it's pretty good - nine skill levels (and the ninth is a real toughie), a four-way scrolling pitch and a banana shot (Who mentioned bananas?)

Having said all that, it's not terribly exciting, mainly due to the uninspired control method - it's more like pushing a medicine ball around a muddy field than a footy - and it dos all look a bit bland. Oh well, I s'pose we'll still have to wait for Microprose/Sensisoft's version...

Before Taito's World Cup, all football games seemed to have forced perspective horizontally scrolling pitches, but now there are more overhead view games appearing on the scene and Supercup Football is just one more of them.

The gameplay is rather enjoyable especially in two player mode, but occasionally the action tends to get rather annoying, like when you can't select the right player or accidentally kick a banana shot which flies off the pitch.

Moans aside, it isn't too bad and should hold your attention for a time, but a serious football fans may become bored after a while, especially if there is no second player to challenge.

Graphics 56%
Portray the action nicely, but the overall look is a little bland.

Sound 39%
A few jolly tunes and effects but that's all.

Hookability 71%
The action is fast enough and should keep you held for a while.

Lastability 66%
The single player game could become boring, but the two player game partly makes up for this.

Overall 67%
An adequate overhead view footy game which isn't too bad for the price.

An adequate overhead view footy game which isn't too bad for the price. 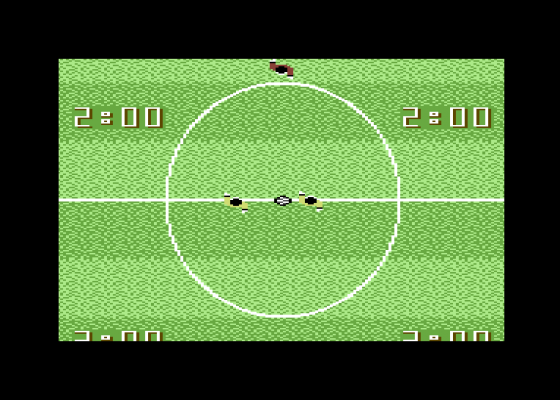