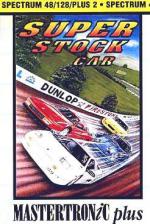 I always thought Stock Cars were supposed to be beaten up Ford Cortinas with all the glass taken out, covered in stickers saying 'Castrol GTX 20/80 is Good For You", but in this Mastertronic effort the smash-'em-up action takes place in the most gleamaceous of sporting fantasies, including Lamborghini, Ferrari, Lotus and Porsche. What's goin' on?!?

The idea is that you, as stock car stinker Rick Radial, have to smash, bash and outclass your opponents racing around six circuits. The scene's viewed from above, and the screen-scrolling and animation are pleasingly smooth, although the actual size of the nicely-detailed cars seems to be too big for the scale of the track. This means that you have to develop very precise control as you hurtle around the bends, because there's really no such thing as a long straight!

One or two players can race, while the other three or two cars are computer-controlled. It doesn't seem to make much difference which car you choose, but as you'd expect the computer's cars are rather good at smashing you off the track, blocking your way and zooming around the bends with mathematical precision, while you will find it much harder to barge them, outrace them or negotiate the track with such skill. The most annoying bit is that if you get a bash, your car spins out of control and often as not ends up facing the wrong way, while this doesn't seem to apply to your opponents.

You have to complete five laps on each track within a set time to progress to the next, and if you finish them all, you go back to the start with a shorter time limit. A plan of the track showing the position of each car, along with various timers and graphix bits, appears on the right hand side of the screen.

But that's not all there is to it! Press R on the opening screen and you access a track-designing routine; you can create your own three-course Cup event by editing the existing tracks, or simply modify the default tracks. The system's very simple - just use the moving window to select the modules you want to stick on to the track, and click to add them to the end of the last piece.

On the whole, Malcolm, this is more than just another racey-racey-round-in-circles game, so get yer paintwork scraped and give it a go.

More than just another racey-racey-round-in-circles game... Get yer paintwork scraped and give it a go.