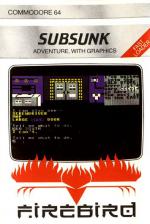 This is the companion adventure to the highly amusing The Helm but, although it too is written using The Quill and has the same low price, it isn't such good value.

The game is set on a submarine and features graphics and sound, although both are on the poor side. It isn't the sort of adventure that will appeal to those hardened and cynical adventurers who tackle such delights as the Infocom series. However it might well suit the younger apprentice wizards, as limited interaction and locations make it quite a simple game.

You take the role of Ed Lines (you're a journalist if you couldn't guess) and you're writing about life aboard a modern submarine. Suddenly (there's always a suddenly!) you're attacked, and before you can submerge, the enemy take the whole crew. Luckily you've hidden and have remained undiscovered. Great, until you find that the sub has been sunk. Find the telex room to send a message and you'll be rescued... otherwise a watery grave awaits...

The game features graphics, if you can call them graphics. They're very poor indeed, created from the in-built Commodore graphic set. They don't add to the game whatsoever. What is more, there is no separate text window - the graphics scroll upwards with the messages.

There are sounds too. These, like the graphics, are horrible. After the opening tune, the sound reverts to horrendous pings, pongs and screeches. Worse still, the noises hold up play! You have to wait for the game to go through the sound for a location every time you enter it.

The vocabulary is limited and the responses are very unhelpful - "I can't" is the standard response for non-comprehension. For example "Examine manual" gives "There's writing on it" . Following that up with "Read" or "Examine writing" will give the stoical "I can't". Getting the manual, as with all objects, result in "OK". I do hate these Americanisms.

Those of you who rely heavily on the "Help" function will be annoyed with this adventure - "You're sunk unless you EXAMINE things!" is the reply to every enquiry. Certainly, it's one which is well-fitted to the £2.50 range and overall not that bad an adventure, but one that I'd recommend only to the juniors.

Not that bad an adventure, but one that I'd recommend only to the juniors.