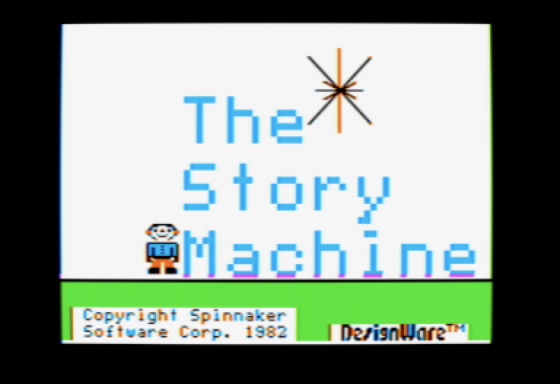 The first program we wrote for our youngest child simply put a new picture on the hi-res screen each time she pressed a key. At the age of eighteen months she was delighted with it. However, it occurred to us, as she began to recognise letters, that we could capitalise on this by presenting a picture beginning with the particular letter pressed.

Our dream program (that is, the one we *didn't* write) was going to allow a noun to be typed and the machine would respond with an appropriate picture. It would even "learn" by allowing a picture to be built up if the word was not in its vocabulary.

At first sight I thought Story Machine from Spinnaker had gone one better than our dream. The idea is that by using a vocabulary of about forty words, a child can type sentences, combine them into stories and see the stories animated. For example, trying "the boy walks to the tree" results in just that - a boy appears and walks to a tree.

Of the vocabulary, there are thirteen nouns ranging from boy, girl and apple to bumpus. (Bet you don't know what a bumpus is!) The eleven verbs also contain a surprise: to zot.

As each sentence is entered, it is terminated with a "full stop" and this causes it to be acted out in the picture. Pressing ESC will cause the whole of the story so far to be acted out.

Additionally, stories can be saved to disc or recalled. Each specially initialised story disc can contain fifteen stories, and there is no limit on the number of story discs you can have.

If it sounds like a fabulous idea, that's just what it is. Unfortunately, I think that machine limitations mean that the implementation of the idea doesn't do it justice.

For example, the vocabulary is quite limited, with only 24 nouns and verbs, the rest being articles, adjectives (like "this" and "that"), pronouns, possessive pronouns and prepositions.

To be fair, the program claims to do more than simply animate noun-verb combinations. For example, incorrect grammar is not admissible and the program crosses out (and then removes) mistakes of this sort.

It is suggested in the manual that the program encourages a positive attitude towards writing, helps children to write longer stories and also teaches keyboard familiarity. However, most of the youngsters I know write longer stories than Story Machine can accept. Also, only the present tense can be used and several of the children who tried the package found this a bit hard to accept. They are used to telling stories of the form "...and then... and then..."

The manual's suggestion to think of the story as a script for the computer didn't impress them much since they didn't really understand the concept of "script".

Only a certain number of actors are allowed in the story at any one time and their activities are limited by the surroundings.

It's not too unnatural to get a "can't do it from here" error message if the actor isn't next to the thing to be acted upon, but this message actually occurs if something is blocking the way. If nothing is in the way, the "must be closer" message appears.

As I said, I think this is a great idea, which has been limited by the machine. The two main limitations are storage space (since only 48K is required) and speed.

In a sense they are not independent since the lack of storage space means it is necessary to access the disc regularly, and this leads to a loss of speed. Imagine how the idea could be implemented with, say, one megabyte of internal RAM. It's not an idle dream because you can get that much RAM on a single card these days, and you can fit seven of them into the Apple!

The increased space would mean a bigger vocabulary without the necessity to access the disc repeatedly.

For all my criticisms I have to applaud Spinnaker for Story Machine. With colour, sound and animation it is a novel (no pun intended) package that the children largely enjoyed.

It's obviously no use producing a package which requires a megabyte in a market where 48K is the norm, but I can't help thinking what it *could* be like.

This does have some obvious limitations, but with good colour, sound and animation, it is a novel package that children largely enjoy.