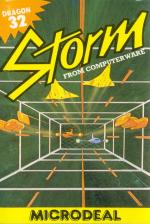 This is the arcade game known as Tempest. It's an unusual and abstract variation of the space battle theme.

On screen you are presented with a rectangular web from the centre of which come the Rainbow Raiders. You are a line which moves around the perimeter firing your gun and scoring points according to the colour of the Raider. The deadliest of these is the Millibar, which stalks the perimeter and, if it collides with you, destroys one of your lives.

This version originally comes from Computerware, an American firm, and is very colourful. Written in machine code, it is as fast and smooth as you would expect. It contains such features as on screen scoring, a record of the highscore and fifteen levels of difficulty.

I had a slight problem with the many pages of on-screen instructions, which are worth reading for this game, because the starting procedure involved keypressing and the joystick for level selection which seemed confusing at first.

It's a deceptive game. The initial temptation to dash around shooting at everything is not the best of tactics, as your shots are limited.

The initial temptation to dash around shooting at everything is not the best of tactics, as your shots are limited.