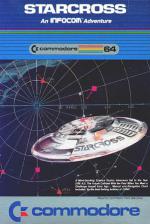 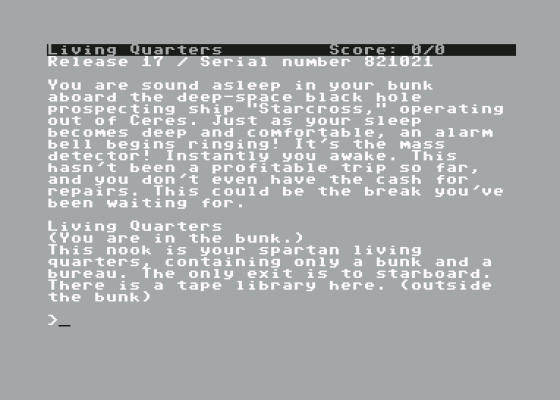 Starcross is Infocom's first hardcore science fiction adventure and is set some two hundred years from now. You play the part of an asteroid miner, down on his luck and in control of a one-man spaceship. During a rest period, your mass detector starts signalling that it has found something in the ship's vicinity. So, what else can one do but investigate...?

Unlike versions available for other machines, Commodore actually manufacture Infocom games under licence in the UK and this enables them to keep the price down. You pay considerably less than you would otherwise, you get less fancy packaging for your disk, and the map necessary for play is printed in black and white as opposed to colour. Not a bad compromise for economy's sake, and something to set an old wizard's wallet at rest!

The packaging of Infocom games is normally very important, as certain miscellaneous items that come with the game contain information necessary for successful play. This is an interesting and viable way of protecting a game as a back-up copy can still be made to protect your investment from the dreaded cold starts from which the 1541 sometimes suffers. 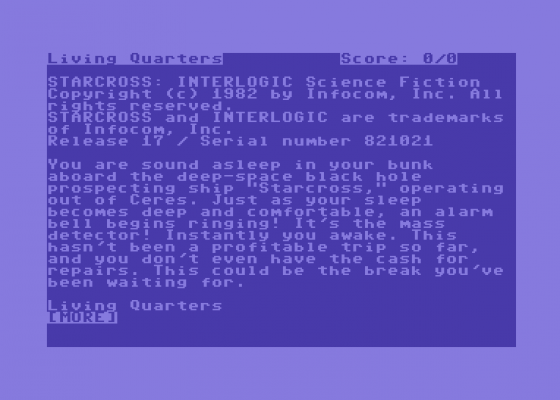 Anyway, back to the game itself...

Once you have been given a description of a particular 'unknown mass' and you have cross-referenced it with the map, you are on your way.

The game seems to have been inspired by Arthur C. Clarke's Rendezvous With Rama, a novel which describes the discovery of a derelict alien vessel by inquisitive human explorers. The vessel was cylindrical in form and rotated about its axis to provide an internal gravity via centripetal force. Of course, a company of Infocom's integrity don't copy other people's material and the only idea of Clarke's they do actually use is that of the design and nature of the ship itsemf (and even then, a few small details are changed). The rest of the game is pure, first rate adventuring.

The vessel is vast as are the problems set before you, but then this is supposed to be the hardest of all Infocom adventures! The ship is in a terrible state and what's left of the crew has degenerated into barbarism on the apparently centuries long voyage. Initially there is a time limit set by the fact that the vessel's atmosphere is running out. Once that has been solved, there are many more difficult puzzles awaiting your attention. Some of these require interaction with various aliens (native and otherwise) and ardent fans of the Zork trilogy may well meet up with old adversaries.

The degree of imagination necessary to solve the game's almost incomprehensible tasks does justice to Infocom's hard earned reputation as the ultimate adventure game designers. However, there is one factor about the game which seems a little unfair. One of the major repairs cannot be successfully done without either repeated trial and error or an active interest in chemistry (A clue: the dot - pictures in the repair bar represent atomic structures).

The overall impression is of pure science fiction with some humour as light relief but to have included a problem which requires specific academic knowledge seems to be going a bit too far. One other very minor complaint is that, with this being one of the company's earlier games, it does not understand some of the abbreviations used in later versions of Infologic. This will only cause you bother if you are used to Infocom anyway and interaction with the computer is still a million miles above anybody else's games.

The ending is really excellent. After repairing the ship and finding out how to reach this ship's equivalent of a pilot's console, you have to set a course back to Earth. Fine, if you know what you're doing but you only get one chance...

There are times when you think you are incredibly close to finishing the game, but don't be lured into a false sense of security. Some of the most deceptive adventure techniques outside The Hitchhiker's Guide To The Galaxy are used to good effect in this game. One piece of advice: save the game frequently. You will be surprised at how far you are allowed to get even though you may (and most probably will) be on the wrong track!

This really is the best example of a superlative science fiction game for the C64.

This really is the best example of a superlative science fiction game for the C64. 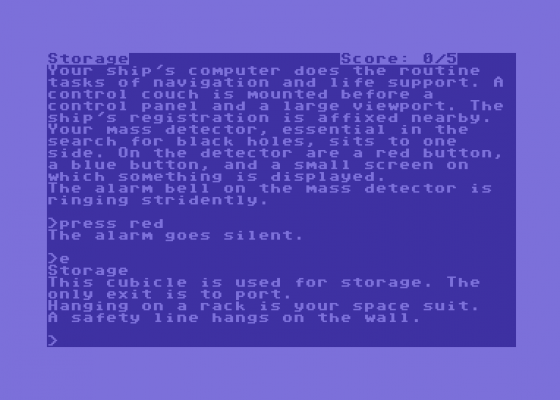