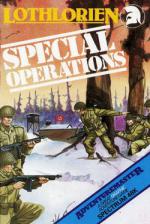 THERE is a game called Squad Leader, a board wargame where players fight out small platoon-level World War Two operations with cardboard counters and a set of very complex rules.

While Special Operations is obviously not based on Squad Leader, the Lothlorien game has a similar setting and clearly belongs to the tradition of board games requiring strategic thought.

You may be required to photograph the compound from a distance or to mount a full-scale operation to sabotage whatever evil weapon is being produced there.

The members of your team will have two special skills - one you know immediately and the other you can find by interviewing likely candidates before the mission begins, although there is not sufficient time to interview everybody.

Which characters you choose is a vital part of the game, as you will need to select those skills which best suit the mission you have chosen.

Because of the variety of personnel from which to choose, Special Operations has a role-playing flavour about it. The test of a good role-playing game is how far it enables you to succeed by entering into character rather than thinking all the time about the rules. Special Operations seems to achieve that within the confines of a computer-moderated game.

The scenarios begin by having you parachuted into a heavily-wooded area near the enemy compound. You will move round the grid-like map avoiding or fighting the German patrols until you reach your objective. The maps may be inaccurate. All you can be sure of is what you can see immediately you.

The program has a separate combat routine. A map is drawn on the screen showing your position and you choose targets for your men and manoeuvre them about the terrain using the available cover to protect them.

All kinds of tactics are possible at that stage. You can try outflanking the enemy or pinning them down with covering fire while sending your men into the open to attack.

Special Operations is not a fast-moving, all-action game. It requires imagination and careful planning to play well but for those who enjoy a more thoughtful game the experience is rewarding.

The seven scenarios are slightly different each time you play, as is the range of characters available. Alternatively, you can use the Save Game option to keep the same team and set-up for a sustained campaign working through all seven scenarios in order.

Lothlorien has produced a welcome addition to the range of strategy war-games available and deserves praise for its success in creating the proper atmosphere of stealth and desperation.

A welcome addition to the range of strategy war-games available... Deserves praise for its success in creating the proper atmosphere of stealth and desperation.