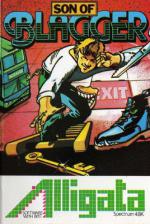 Quite who the hero Blagger may be is not detailed in this game or why the son of Mr. Blagger should be called Slippery Sid who's real dad would appear to be another person called Roger the Dodger. It's all most confusing. What isn't so muddling is that Slippery Sid, attempting to out-emulate his famous dad, is working as an espionage agent deep inside Spectrum Security HQ on a task to collect all the golden keys dotted around the large scrolling complex. Quite why he should be doing this is not explained either and gives the feeling you've just walked into an exciting TV serial in the middle of episode three!

Son of Blagger is a large maze complex with platform overtones along the lines of Jet Set Willy or Monty Mole, although it tends to resemble the latter more. Within rooms, which are of various shapes and sizes, platforms are connected by downward escalators, upwards moving ladders or linked by dissolving floors. Various monster robots prowl the premises on unvarying paths of destruction, guarding the keys. The screen 'window' scrolls periodically to keep Blagger's Son in the middle of the action. There are several levels to play through with a time limit imposed by falling air supply.

'Son of Blagger is a fairly slow Manic Miner type game. Apart from the screen layout, the graphics are not too good and a bit dated, and the sound, which only comes in a tune form, is affected, like the animation, by the scrolling screen. I saw this game for the CBM about six months ago and then it seemed quite impressive, but now on the Spectrum I've lowered my opinion of it. I think everyone's just about about had enough of games where all you do is pick up keys and time jumps.'

'First thing in this game I thought the graphics were most attractive - a major part of any game. Animation is great; detailed objects spin and rotate, 'you' walk very nicely. The main thing that spoils this game is the speed at which your man walks. I've heard of slow, I've heard of very slow, but this goes beyond a joke. The game gets tedious to play after a while, and collecting trivial objects like keys becomes a boring task. It's a shame that a game of this standard of quality of graphics is let down by the slow movement of the key item in the game - you. What can l say, buy the game and put up with the slow speed of play but enjoy the nice graphics, or not to buy the game and never to be able to see the colourful detail? The choice is yours.'

'There's a lot to see in Son of Blagger - that's if you can get to see it before the ever so slow pace of the hero and the irritation of having to constantly go back to the start each time you lose a life gets to you first. Graphics are cheerful, well drawn with plenty of details. The continuous tune is adequate, although it's a pity everything comes to a stop when the screen scrolls over a bit. But the real let down is the playability of the game. It's ruined by the sluggish pace of play, because otherwise, the combination of timing required with the movement of floors and nasties is perfect.'

Graphics are cheerful, well drawn with plenty of details. The continuous tune is adequate, although it's a pity everything comes to a stop when the screen scrolls over a bit.