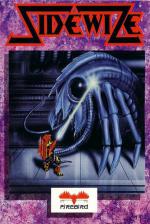 What a way to spend a Sunday, stuck up in space with a jet pack on your back and a blaster in your hand, obliterating attacking waves of aliens...

At first these belligerent creatures approach in predictable fashion, but as more and more of them are destroyed the waves become more complex and less predictable, sometimes attacking from both sides of the screen. Wiping an alien out takes accurate lire, and sometimes more than one shot. Laser walls move very fast across the screen, and avoiding them takes great agility and accuracy.

When certain waves have been destroyed, 'Firepower' and 'Move Faster' arrows are revealed. Six of each are available for collection by touch.

But after the alien hordes have been eradicated, a larger creature is revealed. Destroying this overgrown beauty requires considerable fire power - but when it's blown to bits you can go on to clean up the next of the four planets.

'Odin's games are usually a joy to play, but Sidewize doesn't quite live up to their standard. The graphics are very clear and it would be hard to fault the animation, but none of the colours work. The sound is good, though, especially the title tune. Sidewize is a straightforward shoot-'em-up; it's playable and enjoyable, though I didn't find anything to keep me hooked.'

'Firebird seems to be a bit late off the mark with this Nemesis-type game - you'd have thought that after a good look at this popular genre the producers would have come up with a decent product. The add-ons seem to have no effect, and the enemy waves hardly vary. Colour is very badly used, and the screen soon becomes a strain on the eyes. Sidewize is very repetitive and boring - a great disappointment, especially on the Gold label.'

'Sidewize is really dull. The graphics are unattractive, and most of the attack waves have been ripped off from Thalamus's Commodore Delta. There's little to hold the interest; the planets are very similar, and once you've played long enough to predict the attack patterns (about an hour) there's nothing left.'

Side Wize is very repetitive and boring - a great disappointment. Colour is very badly used, and the screen soon becomes a strain on the eyes.