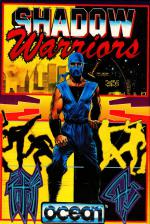 If there were as many ninja warriors in real life as there are in computer games, you wouldn't be able to walk ten yards down the street without someone jumping out going "EEEEEggghhhhAAAH!", whirling spikey things around their heads then leaping over a bus. Fortunately these mythical warriors are largely confined to computer games and badly-dubbed movies, and Shadow Warriors doesn't add much to the dozens of punchy-kicky titles already on the market.

Plot? You want plot? Okay, but don't say I didn't warn you. Five secret Ninjitsu fighting techniques have been passed down to the Shadow Warriors from medieval times. But now an Oriental demon has possessed the mightiest of the warriors, and you must fight your way through squads of ghoulish assassins and finally defeat the evil demon.

As you can imagine, what this means in effect is a lot of chop-chop action as you battle across the scrolling backgrounds through six levels of urban sprawl, to the accompaniment of rather super music.

The graphics are, erm, colourful... almost barfingly so. I often think that a monochrome game with no masking problems is preferable to this over-use of colour, especially when as in this case it hard to keep track of your warrior. Although he's basically blue while the baddies are red and yellow, when anyone gets hit they flash red, and with all the flashing going on (oo-er) it's hard to keep track.

You can move in and out of the screen, left and right, somersault backwards and forwards by moving the joystick diagonally up, and attack the enemy using joystick left right and fire (for some reason there's no Kempston joystick option, just Sinclair and keyboard). You don't actually have a choice of fighting moves - the game seems to choose punches or kicks as appropriate. Trouble is, most of your opponents take a lot of killing, you can knock them down two or three times before they give up the ghost.

The best tactic is to progress slowly through the levels, taking on baddies in ones and twos rather than rushing into large groups. Get your back against an object, press the fire button and watch them walk into your blows. If you get surrounded, you're done for; unless you get the first punch in the baddies tend to go PUNCH-KICKPUNCHKICK PUNCHKICK, and you stand there paralysed until you lose a life. Lots of games have this annoying semi-bug, and I'm FED UP WITH IT!

If you smash up a few objects you'll find tokens which will give you extra lives, extra points, and energy, indicated by a number of swords and a counter at the top of the screen.

Assuming that you can manage to negotiate the walkways without falling into a crevasse, you get to the end of level one, where you meet the end of level guardian, a rather silly-looking fat butter-yellow chap. Kick him to a pulp and you're on to level two. which is rather neat, as cars zooming diagonally up the screen squash you to a pulp before the chap swinging a huge log can do it for you.

You have to complete each level before the timer runs out; it's reset to 99 at the start of each level, and mercifully there's a CONTINUE option so you can resume playing from the furthest point you reached when you lose your last life.

There isn't really a speck of originality about Shadow Warriors, which is yet another coin-op conversion, this time based on a Tecmo game. Nonetheless, if you can forgive some of its peculiarities it will be a stiff challenge which any kung-fu killer will be happy to take on.

Colourful Ninja action. A bit messy but high on playability.

Colourful Ninja action. A bit messy but high on playability.