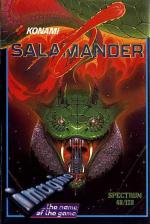 OK. If you were one of those naughty people who said Salamander is just Nemesis with different scenery, raise your hand.

Come on. (Pause for sharp intake of breath whilst reviewer shamefacedly raises her hand).

Weeeellll, come on Konami, you've gotta admit there are certain similarities. The graphics and the gameplay to name but two.

I But just because I have my feet firmly in the camp that says Salamander is just Nemesis with knobs on, it doesn't mean I'm not a fan. Far from it. I've stood there, forcing my ten-pences in the machine, trying desperately to fly through fire. So I was jolly pleased to see that Konami had done such a good conversion.

Yup, Salamander on the Spectrum is pretty spiffy, coming complete with all the add-ons that one would expect from such a sophisticated shoot-'em-up. It's pretty fast, incredibly tricky, and great fun to play. The End.

Salamander involves flying one's little spaceship around the treacherous cavernous, scary landscapes, picking up extra weaponry in order to blow the hell out of the large disgusting brain-like thing and thus progress to the next level.

What happens is this. To begin with we are in a black space, flying a white craft shooting at waves of white aliens. Bwrilliant. V dull, no colour, how appalling. This stage is absolutely simple. After one go you learn where the alien waves are coming from, making it easy-peasy to pick up every single bonus weapon under the sun.

And getting the weapons isn't even hard! You don't have to select! You just fly over them! (That's enough exclaiming for one day). The last ship in each wave will conveniently become an add-on for your ship, and once you've flown over it you're well equipped. Easy. But, my life, do you need all the equipment you can get? Because now you're on to the exciting part, starting off with the bendy claws bit.

These are something of a pain. They grow out of the rock face, waving about the place, and smashing straight into the side of your tiny ship. Unless, of course, you shoot the flashing bit first. Each bendy claw has a flashing bit near its base, and only by shooting that can you kill it, but watch out. The flashing bit will almost certainly be tucked right next to a large lump of rock and, you've guessed it, bumping into the scenery means instant death.

Once past the bendy claws, life does not, unfairly I think, get easier. Now you have to face gun emplacements, chunks of scenery, teeth-sort of things, fire, flame, meteorites and other such fripperies. And so on, and so on, until you've whizzed your way through the levels to blow up the big thing at the end that squirts bubbles. (Don't ask about that, if you've seen the original, you'll know what I mean, if not, it's far too complicated to explain).

Salamander is a pretty impressive romp through space, keeping faithfully to the coin-op. It doesn't have as many levels as the original, though, and the sound's a bit plink-plink-fizz.

If you're a Salamander in the arcades fan, then you should be well pleased with Salamander on the Spectrum. If not you'll just like it because it's a good shoot-away.

And if you're a Nemesis fan, perhaps you'd just like to buy it to make sure it's just Nemesis with add ons.

A well programmed conversion that should go down a treat with all shoot 'em up fans. Few levels and OKish sound.

A well programmed conversion that should go down a treat with all shoot 'em up fans. Few levels and OK-ish sound.