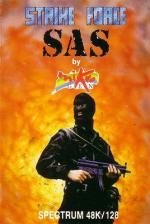 Trying desperately hard look like Lewis Collins in Who Dares Wins, and failing for obvious reasons, I loaded SAS strike force into the ol' Speccy. And the loading screen was red.

Which seemed to me to indicate extreme violence and bloodshed. Which meant, I assumed, that this was a typical sort of game.

The scenario goes something like this. There are these terrorists who are threatening to change life as we know it, to destroy everything that we in this country hold dear.

So get in there and waste the afro hair-doed terrorists. All by yourself. Yes. The Strike Force being somewhat depleted, perhaps they're working to rule or something like that, it's up to you to do the job all by yourself. There are mines all over the place, and there are lots of terrorists and there are some Midland Bank griffins. No, no, sorry, they're the hostages, so I'm told. (But they look like Midland Bank Griffins. Honest).

Perhaps you'll have realised that the graphics are not brilliant. And because the screens flip rather than scroll, you never know what's around the corner, and it's all too easy to tread on a mine and get blown to Kingdom come because you just didn't see it.

Of course, this being your average Mikro-Gen sort of game, you'll know instantly that this is a game which also suffers from that horrible disease, the attribute problem.

After a while, the sight of your hair turning from orange to magenta to something completely different gets rather depressing, and the temptation - to shut your eyes and fire gets rather great (You can actually kill a lot of things like that, but most of them tend to be hostages and trees and suchlike).

It's important to keep an eye on your ammunition as it tends to run out at the most inopportune moments. However, if you run over certain objects, you're ammunition will increase. You get extra points for keeping within the time limit, not using ammunition and wasting the terros.

Although SAS Strike Force could have been a very nice game, it doesn't quite make it. To take a fairly commonplace idea and turn it into a game that will enthral players requires excellent graphics, soundtrack and the like. To marry an ordinary idea with ordinary programming is to produce a game that takes its place amongst the mediocre.

Cashing in on the heroes of the SAS does not produce a game to drool over. Runny-jumpy game - not a lot else.

Cashing in on the heroes of the SAS does not produce a game to drool over. Runny-jumpy game - not a lot else.