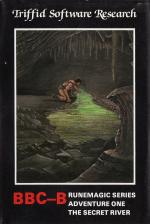 Although I was sent both adventures for review I can only really comment on the first. This is because you have to solve the first one before playing the second and I must confess to running out of time and patience before achieving this! Further adventures to follow these two are promised for the future.

The first adventure tape has two different programs recorded on each side of the tape. One of these is a "character generator" and is a substantial program in its own right. You have to make a number of choices about purchases oof weapons, body armour, magic spells, etc. You have limited resources and no basis upon which to guess which should be chosen. However, you can construct and save to tape several different characters to try in the adventure.

After loading the (River) adventure you must then load in your character data file. If you solve the game then the program will (apparently!) save a revised form of your character with extra wealth and experience to tape. This can then be read back by the character generator program allowing new purchases and a fresh character save before playing Adventure 2.

The game itself makes intelligent use of Mode 7 colour to highlight different types of messages (no graphics). It is a fairly standard adventure game involving caves, mountains, combat with trolls, etc. If you get into a fight the program takes over and prints a series of messages about the success of attacks on either side until either you or your opponent lies dead. Whilst the chance of victory depends on the strength and armoury of your current character, it is nevertheless problematic - a fight won in one play may be lost under identical conditions in a subsequent play.

While the character generation routine is novel, the screen display good and the price reasonable, I found this game unsatisfying in several respects. First, descriptions are rather short and dull (my research through the heavily protected files eventually uncovered a Basic program with no text compression). Second, there is no save/load position option on Adventure 1, though Adventure 2 has this feature. Third, and most important, there is too big an influence of chance - how you happen to choose your original character, probabilistic fights and even the reprehensible killing without warning on entering certain locations.

Personally, I prefer games based on reasoning rather than chance and am sick and tired of caves and trolls. However, I think the idea of a series of adventures with a developing character is a nice one and I expect these games will appeal to some.

I prefer games based on reasoning rather than chance and am sick and tired of caves and trolls. However, I think the idea of a series of adventures with a developing character is a nice one and I expect these games will appeal to some.