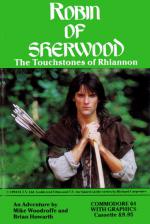 In Adventure International's latest game, licensed from a successful TV series, you play the character of good old golden shot, Robin Hood. The game is a graphics adventure in Adventure International's latest style of split screen and multiple word input. Although the White Wizard has never actually seen the series on television (I'm afraid the White Wizard doesn't possess such a novelty), it appears that this is a totally new adventure for the legendary hero. This is definitely a good idea since many people in the same situation as myself can get straight into the game.

The game arrived at my abode along with what turned out to be a very useful hint sheet. The screen display is very well laid out, with the now standard picture window, message section and input window in respective order down the screen. The graphics are good too, seeming to have more texture and life to them than recent Level 9 mixed-mode adventures of late. Input is handled quickly and vocabulary isn't bad, but after having played Starcross earlier on, it still seemed relatively simplistic. For instance, right after the beginning of the game, you are stuck in a dungeon. After gaining information about the only possible exit point, the necessary course of action was fairly obvious even before checking the hint sheet (which was needed eventually). Yet, because of the input restrictions, it was quite a few turns before the computer understood what was wanted of it. The final command really was so ambiguous, it was most annoying.

One good new feature was that individual commands could be strung together using a comma or a full stop. The word search routines must have been modified as well because you can now input full sentences and as long as they only contain a single command, they are acceptable.

Still, you can't have everything on a cassette-based game and sooner or later you get an impression of what kind of commands the computer will respond to. As you are trapped in a dungeon in Sir Guy of Gisbourne's castle when the game starts, it does become somewhat important that you can express your desire to leave forthwith.

The adventure is not really for beginners, with some terribly sticky situations to get out of (no, that isn't a clue). On the whole, Robin of Sherwood is around medium complexity by AI standards. The object of the adventure is to find the Touchstones of Rhiannon, hence the game's subtitle. This involves several long-winded searches to find your allies and equipment, and the timely rescue of Marion (oh yes, there's a love story too). The whole affair is reasonably paced. There aren't too many puzzles in your path but they are accordingly difficult. Game time only exists during input, as is the norm with this type of adventure. Other than the minor alteration to the input routines mentioned earlier however, there is nothing particularly new about the game.

All in all this isn't a bad adventure, but even though it features one of television's most popular heroes at the moment and it is quite competently written, there are plenty of superior games out on the market, with more originality too. You could do a lot worse than add this to your collection, and if you are a fan of Robin Hood you will probably find it worthwhile, as one of the game's strong points is its atmosphere. Having said all that, if you didn't rush out and buy it, you would not have missed out on much...

If you are a fan of Robin Hood you will probably find this adventure worthwhile... One of the game's strong points is its atmosphere.