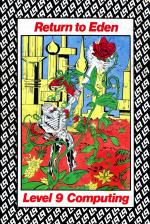 In Return To Eden, you continue the adventures of Kim Kimberley, who having saved the Snowball spaceship now finds him or herself a fugitive from the law - wrongly accused, of course. You start in a crashed stratoglider on the planet Eden and your first problem is to avoid destruction from a nuclear blast which devastates the surrounding landscape.

I know that it is a reviewer's obligation to rave about Level 9 adventures but am I alone in being just a little disappointed with Return To Eden? What I loved about Snowball was the marvellous descriptions and the logical nature of the puzzles - however difficult, it was possible to reason out solutions. The text in Return To Eden, though good, does not quite match the wit and style of the previous game and I found some of the puzzles quite arbitrarily difficult. If I hadn't used the clue sheet I suspect that I would have given up fairly early on.

Having said that, there are nevertheless some very original and clever ideas in the program which is well above the standard of most commercial adventures. As usual the documentation is extensive and excellent and they even provide several wall posters. There was also a very pleasant surprise: I had understood that BBC owners, with their small memories, were to be denied the pictures offered to Spectrum and Commodore 64 owners, but Level 9 have, in fact, provided the 240 pictures of the Eden landscape. There is only one snag - they won't fit into memory at the same time as the adventure. Hence, to view the pictures of Eden, you must CHAIN a separate sequence of programs recorded afterwards on the tape!

I thought the Mode 5 pictures were beautifully drawn - certainly more aesthetically appealing than those in Twin Kingdom Valley - and they add considerable value for money to the package. Whilst it is frustrating not to have access to the graphics when playing the game, it is interesting to view the pictures - which cycle automatically - from time to time. You recognise locations that you have visited and glimpse others to come, which can provide small clues. Another major benefit is that my three year old son will sit watching them happily for hours!

In conclusion, like many a sequel to an outstanding book or film, Return To Eden does not quite live up to the original. However, the high quality adventure combined with the documentation and graphics programs still makes this package an excellent buy.

Doesn't quite live up to its prequel, but the high quality adventure combined with the documentation and graphics programs still makes this package an excellent buy.