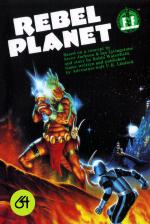 The Wiz first gave you a glimpse of this game a couple of months ago and promptly got a slapped wrist from Adventuresoft, who didn't like being associated with the now defunct Adventure International. They especially disliked the references to Brian Howarth when he had nothing to do with the game. Even Wizards make mistakes. Anyway, they have invited me to pay them a visit soon to see how their games are designed, so stay tuned...

And on to the game. The first thing I noticed about the Commodore version (having had a Spectrum copy for the review) was the increase in graphic quality and the speed of response. The former aspect is to be expected, but the previous version had taken some time to respond to commands, whereas interaction was almost instantaneous on this one (as indeed it should be).

For those of you who missed out on the plot last month, you play the role of an agent for the Earth based organisation SAROS (Search And Research Of Space), which is trying to break free of the grip of the expanding Arcadian Empire. You are on a mission to the planet Arcadian itself, disguised as a merchant. Once there, you must destroy the central computer controlling the minds of the enemy troops. First you must travel to two other worlds to mislead the Arcadians. Then, on arrival at the homeworld, seek out allied spies who have information on how to access the computer with a series of number codes. Simple eh? Still, it's better than average.

As mentioned in the preview, the game is based on a book by Robin Waterfield which forms part of Ian Livingstone's and Steve Jackson's Fighting Fantasy series. Whether reading the book will help you with the game, I don't know; I doubt it would be much use after previous experience. The game is neatly packed in a double cassette case with a decently sized instruction leaflet.

Games like this never seem to have a reasonable vocabulary or parser. When the computer gave me a yes or no prompt and I typed in 'N', it said 'You cannot go that way.' It understood 'laser' and 'sword' for laser sword, but only understood 'ampoule' for analgesic ampoule. Some of the responses were a bit non-sensical as well.

Ah well. It takes some time and a very precise course of action to stock up with supplies and tools before you land on the first planet. After that you have to keep track of your personal status (energy tablets may be carried to sustain this) and the scheduled take off time for your vessel. If you're really stuck you can retard take off time, but this feature may only be used once, so be careful.

Rebel Planet is a fairly standard effort and though I mentioned the parser before, at least now has AND, THEN and IN usage (which does prove useful). The graphics are pleasantly drawn as well, so those who don't have the necessary imagination to view their surroundings in adventure games should not be disappointed. Those who are more interested in the flexibility of the plot and interactive capability of the game may be.

There are some good points. Using a time limit works well; it adds a bit of pace to the setting from which the adventure benefits greatly. The location descriptions are always visible on the screen, which cuts out the necessity to retype 'look' every time you want to inspect the surroundings, and the screen display itself is very neat. There's very little atmosphere though; the game relies too heavily on its graphics for my liking. All this comes down to taste. Yer pays yer Zorkmids and takes yer choice. I can think of plenty of other games I'd rather spend my hard earned Zorkmids on.

A fairly standard effort... There's very little atmosphere and the game relies too heavily on its graphics for my liking.