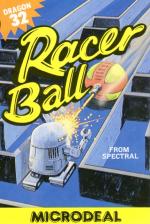 This is an import from America, written entirely in machine code. It's a Pacman variant and a good one with very smooth controls.

This time you are a Racer Ball "guarding the corridors on the Moonbase". The Laseroids are your enemy, and there are the usual energy pills to reverse the tables.

Bonus points are awarded as different fruits appear increasing in value as you clear each screen. There are 16 levels of difficulty, on-screen scoring and a high score table at the end.

The graphics, given the new scenario, are good but I thought the appearance of fruit in this situation was most peculiar - aren't there enough space-type objects that could have been created?

The sound effects were superb, and blended in with this fast-moving game very well.

I can understand how addictive these games are as they generate a high level of concentration and involvement. The killer instinct forces you on to attempt the unattainable. If you've been after a Pacman game on your machine, then I think this is a very enjoyable version, allowing you to start at a gentle pace and working you up to the frenzied frontiers of impossibility.

If you've been after a Pacman game on your machine, then I think this is a very enjoyable version.