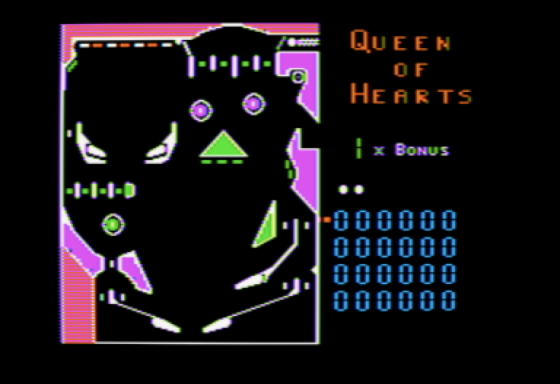 If you've got your games paddles super-glued to the sides of your Apple, the chances are it's because you're a pinball addict like me. At least Queen Of Hearts carries an addiction warning, so you can't say they didn't warn you.

It comes from Strategic Simulations, a name more usually associated with games like Road To Gettysburg (was Bob Hope in that one?), Computer Bismark and Southern Command. However, the company now features a new series of RapidFire games, and Queen Of Hearts is the latest addition to the series.

The illustration shows the table as presented on-screen, with five flippers and the usual collection of rollovers, bumpers and drop targets. There are two ABCD lanes, and various other combinations yield bonuses or affect the bonus multiplier. There is also a nudge facility via the space bar (but beware the dreaded tilt).

In short, the table has all the standard facilities... so how does it feel in play? First, the good news. Queen Of Hearts compares favourably with the other tables I've played, and that includes Sublogic's A2/PB1 Night Mission. Although it can't be adjusted like Night Mission, I prefer the feel of Queen Of Hearts.

There seems to be more room for skill to develop, particularly with things like keeping the ball in play and placing the shots. It also has a free ball bonus, which I find more meaningful than the free game when you're not putting money in the machine. Up to four people can play, and a Hall of Fame saves the top 20 scores to the disc.

So what's the bad news? Well, there are a couple of little bugs in the program, the most serious of which had me leaping up and down in anger when I first discovered it. I was sneaking another game and had toggled the sounds off, and I managed a new high score. Imagine my chagrin - to put it politely - to discover that high scores aren't saved if the sounds are switched off.

There doesn't seem to be any good reason for this (except to punish people who are playing surreptitiously - why else would you want the sounds off?) and it's not mentioned in the instructions. On one occasion, the ball stuck to the left hand side of the top left hand bumper. It wasn't lodged in between the bumper and anything else, it just stayed there and the score rolled relentlessly up and eventually over to zero again.

No amount of flipping or nudging would dislodge it, and in the end I had to reboot the disc. The behaviour of the score during this episode suggests that if you score more than 999,999 you will start again from zero. This means that your highest score might not make the top 20.

Having scored in excess of 800,000 on at least one occasion, the prospect of breaking the 999,999 barrier is not all that remote. There is also a tendency for one of the flippers not to be "undrawn" properly when it is moved. However, this doesn't affect its operation at all - it just looks a little messy.

Also on one occasion the program failed to count one of my bonus hearts, thereby depriving me of ten units of bonus. A few weeks before receiving Queen Of Hearts, I got a chance to play with the Pinball Construction Set, but even my best efforts were nothing like as exciting.

It feels as though a lot of design thought and play-testing has gone into this table, with the results being well worth the effort.

Apart from the ball stuck to the bumper, the problems don't really affect the quality.

Despite the problems, I still think Queen Of Hearts rates as a great pinball table. If you want to experiment with different parameters or different layouts, then go for Night Mission or Pinball Construction Set.

If you want good, addictive pinball I can recommend Queen Of Hearts. No, honest, I've *got* to play it again in case I've missed anything for the review.

If you want good, addictive pinball I can recommend Queen Of Hearts. Even my best efforts using the Pinball Construction Set were nothing like as exciting as this.