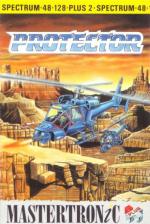 Apart from the fact that it has the worst graphics in the world Protector has a lot going for it. It's certainly fast - so fast, in fact, that when you're playing against a computer opponent, it's all over before you've got your chopper off the landing pad.

In fact, despite the shooty-shooty cover artwork, there's more than a teeny element of strategy to this one. The split screen shows a desert landscape featuring a mountain base and your helicopter landing pad. In the bottom half is your opponent's chopper. The aim is to pick up supplies from the desert, return them to your base, then assemble a bomb from them and nuke your enemy. Nice!

The graphics are frankly weedy, with the worst-designed helicopters I've ever seen - they look more like soap-bubbles, and the monochrome backgrounds are similarly sparse. Still, you can't say that things don't move quickly; the screen scrolls so fast that it's difficult to bring your chopper to rest exactly over a crater, and lower yourself onto it. Your computer opponent doesn't have any difficulty, which makes it much more fair if you play against a second human.

The most annoying aspect of the game is the way you have to wait on your landing pad as your chopper is refueled and re-armed after each crash. You can lose a life by crashing into a mountain, but you can't collide with your opponent. You can shoot each other with your 30mm Gatling canon (which goes 'blip blip') ) but this just causes you to drop the load you're carrying. The best part of the game is dipping into your enemy's fortress and pinching his goodies - but he can do the same to you, remember.