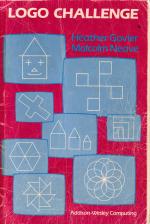 "...children are introduced to the logical problem-solving skills involved in programming a computer. The child's role is to command a 'screen-pen' to draw pictures or patterns. At first these may be simple shapes such as squares or triangles. Later these basic elements can be combined to produce complex and fascinating constructions.

Even at the simplest level there is a need for clear thinking and logical analysis. Only a carefully thought out and precise series of instructions will produce the required result. Anything else will result in a flaw in the picture of a 'bug' in the program. The appearance of such a bug presents the learned with a challenge to find and correct the error."

The above is a quote from the introduction to the Teacher's Guide to Logo Challenge, which was the Logo package produced for schools by Addison Wesley in 1983. It appears to offer the open ended program that no school can afford to be without - indeed, I think it's true to say that most involved with using the computer in the primary school would agree that a version of "Logo", i.e. turtle graphics, should be available in every school. If the computer is being used at home for educational purposes rather than arcade games, then the same applies.

Picture Logic is, with some minor modifications, e.g. printer option, the same program revamped for the home market. The children's booklet has exactly the same contents, same number of pages - but reduced in size, and a new cover stuck on the front. The User Manual duplicates much of the Teacher's Guide but, unfortunately in my opinion, omits the notes on using the program with children, which parents sufficiently enlightened to use this type of program with their children would find helpful.

Picture Logic is probably a better name for the program, as it contains a very limited subset of the full Logo language. However, this is sufficient to introduce young children to turtle graphics - whether they'll be happy with the restriction of drawing lines in one colour is another matter!

The children's book mentioned above takes the user - most teachers would encourage small group use as this allows scope for discussion and interaction in problem solving and the sharing of hands-on control and decision making - through the stages in a logical and efficient manner and gives a useful introduction to the idea of structured programming. Several teachers experienced in the use of turtle graphics though the "challenges" were somewhat lacking in "bite", although in fairness the introduction makes it clear that the children's own ideas and the challenges they set for themselves and their friends are more important, and is more in keeping with Papert's philosophy.

Having recently attended the MAPE Conference, where there was an air of despondency among software representatives, I can appreciate that software houses are keen to encourage parents to buy programs primarily produced for schools to help make up the many thousands of pounds they have laid out. A lot has happened in the Logo field since Logo Challenge was produced. Unfortunately for Addison Wesley, besides the four ROM-based Logos, several other disc-based versions are available at a considerably lower price and with a greater range of facilities. So, unless they reduce the price to a more realistic figure, they could end up with many copies on the shelf.

A lot has happened in the Logo field since the original Logo Challenge was produced. Unfortunately for Addison Wesley, besides the four ROM-based Logos, several other disc-based versions are now available at a considerably lower price and with a greater range of facilities.
Logout