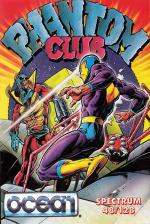 Groucho Marx used to say that he wouldn't join any club that would have him as a member. Normally I'd agree, but I would name an exception for the Phantom Club.

This elite brotherhood, you see, consists entirely of superheroes with amazing powers - so I'd feel right at home. Unfortunately, absolute power corrupts absolutely, and the overlord Zarg has turned to the ways of evil. Well, what did they expect with a name like Zarg?

As Plutus the Zelator, lowest ranked of the Phantom Club, your task is to defeat Zarg and other corrupted superheroes.

While you might find the isometric graphics style and the 550 chambers reminiscent of many an Ultimate-style arcade adventure. Phantom Club has enough original elements to make it stand out.

For a start, instead of the slow shuffle with which heroes of such games usually get around, Plutus jogs at a respectable pace, and on your pressing the space-bar he executes an impressive forward dive and roll. You'll need this to avoid low walls which block the entrances for some of the chambers, and the nasty spiders which try to bite your ankle.

Your main opponents, though, are the other superheroes, and this is where the game gets really interesting. Each enemy has different powers. PsiMan, for instance, generates a psychological barrier which prevents you from leaving his chamber until you destroy his flying spirit. To do this you spit energy beams from your helmet.

Some enemies are indestructible, and simply have to be avoided until a timer runs its course. Grabbing a floating sphere can win you an extra life, but touching it again depletes your energy. A floating diamond can award you extra speed, while shooting a rotating tube allows you to save the game.

In some rooms you find what looks like a movie screen. Shooting this brings up a text display giving you details of a special mission. However, you'll only be eligible for this mission if you have reached a certain score and rank. Your eventual aim is to reach the rank of Ipsissimus, at which point you can defeat Zarg.

Phantom Club looks very much like Imagine's hit Movie, not surprisingly since it's by the same programmer. In many ways it's more imaginative than Movie, with strange science fictional backgrounds, weird armoured enemies and surprises like man-eating plants which snap at you as you enter a chamber.

However, Phantom Club is pretty hard on the eyes because some of the colour choices are terrible - would you believe white on green, or purple on white? it would have been much easier on the old retinas if it stuck to black backgrounds.

With a choice between rotational or directional control, joysticks or keyboards, Phantom Club is fun to play and fast moving.

It doesn't require too much thinking and planning - you don't, for instance, have to collect objects and work out what they do. The sheer size and speed of the game still makes it one of the most interesting of its type to appear since Movie.