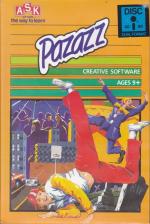 I've just spent several hours playing with one of the most intriguing pieces of software I've come across. ASK's Pazazz "brings the world of entertainment to your computer and puts you in the Producer's chair. You can design your scene, compose your music, create your performer and control the action. Using the pieces already supplied you can set your performance in a disco, a circus, a street-scene or a graveyard. Your figure can be a skeleton, a breakdancer, a disco girl or a clown. When you start to design your own performance, the possibilities are limited only by your imagination. When you have created your performance, you can save it to tape or disc, and then use the separate parts in other performances". Yes, I am writing about a program which will run on that dear old-fashioned eight bit micro!

The title screen gives a menu of four options: Figure, Music, Scene and Pazazz. The first three allow you to load, save or edit (including create) one element of the program, while the last permits the user to run sample or newly created files or link up the various options, e.g. a skeleton dancing to the circus music at a disco - "Mixing and Matching is half the fun of Pazazz" As with most open-ended programs, it's as well to try out the examples on offer then make some amendments before trying to create your own masterpiece, otherwise you'll probably find it's not quite as easy as you think.

As a piece of software, it's superbly constructed. Although all the instructions may appear somewhat daunting at first, really the programs are very well organised. The options on offer are displayed at the bottom of the screen, and scrolled by pressing the appropriate cursor key. The required option is selected by pressing Return when it's positioned in the centre of the window. A touch on another cursor key takes you back to the previous menu if necessary.

The program and notes are accompanied by a useful booklet of Teachers' Notes - Suggestions for Using Pazazz with Children. Undoubtedly, the first piece of advice to bear in mind is that "Simplicity should be the watchword when using Pazazz for the first time" - and the second! Let's start with the Figure program - you might prefer to begin your creating with the background or the music. Load the program and select the EDIT option and a Framework for the figure appears on the screen with a small flashing cursor inside the frame. Move the cursor around the grid, selecting the colour and filling in the small squares by pressing the Space Bar. There's a useful time-saving MIRROR command which allows the left side to be copied onto the right - careful, not the reverse. You can design your figure in up to four colours, but these can be changed by selecting from a further four on the menu. As you design your figure, a replica appears on the right of the frame in its actual size.

Of course, most of that could be done using a teletext emulator, but it's the next section which will really appeal - making movements. This is done by selecting the MOVE option in the Pazazz section of the software and using the dummy provided in the program, one of the four existing figures or the one you've just created. This can be done against a blank background, one of the existing backgrounds or one created in the "Make your own Scene" option (see below) - remember the simplicity warning! The program allows up to 800 frames or movements and, while this is happening, two numbers are shown at the top of the screen - the number on the left is the current frame and on the right is the total number of frames recorded. The figure can be moved anywhere on the screen and have any of its limbs animated - it has nine joints and ten body parts which can be moved into any position before being recorded as a frame on the animation sequence - "the possibilities are almost infinite". Other commands allow you to watch the movements you've created, or change/delete/insert a frame, while COPY lets you duplicate a section of frames from anywhere in your sequence or from another file.

The Scene section gives you the option of working with the keyboard or joystick control to design a backdrop. You can use a CIRCLE or OBLONG, TRACE - which draws a line wherever the cursor goes - and FILL in an area using any of the four colours. You'll need to remember this, as these four colours must match or they will be changed to match the colours used to create your figure when both are on the screen and, if you're not careful, your figure can be lost in the background. Also, beware of any lines surrounding the areas which do not meet, because the fill routine will leak into the rest of the screen.

Music presents you with a five octave instrument. The handbook contains a drawing which shows which of the alphanumeric keys are used to represent notes. There are only two octaves on the keyboard, but pressing either : or / moves the octaves up or down. You can have up to 255 notes in each of two VOICES, change the BEAT and RHYTHM, and have the same sort of editing facilities as were provided in the Move section. Not being very musical (a gross understatement!) I wasn't very happy with my own performance.

You can polish your performance by using the SYNCH option to synchronise the movements to the music and to help you with this you can slow down the using using the TEMPO option. When you've created a new file for each section you can see the whole performance.

I've shown this program to quite a number of teachers and from their reactions I think it's likely to be one of those that'll be right at the top or the bottom of your list. A group of secondary teachers thought it had considerable potential for drama, while a number of my primary school colleagues thought that the time required to produce a satisfactory presentation was unrealistic in the classroom situation. Others thought that drama at the primary stage should be about real people in real situations and that music is far better if composed on "real" instruments, although I take the point made in the teachers' notes: "A whole new world of music is opened up to children who might otherwise feel that they have not the skills to make music on 'real' instruments, but can identify with the more 'mechanical' computer, which allows mistakes to be edited out". Personally, I think it could go down very well with the right group in a computer cub or, if you've a computerate youngster (or not so young!) at home who is creative and enjoys a challenge, then this could be just the thing!

Could go down very well with those who are creative and enjoy a challenge!
Logout